Harrison Ford has been fairly vocal over the years about being exhausted by the Star Wars franchise. By the press, the events, and the hordes of overzealous fans. He's also been equal parts humble, giving lots of great interviews for behind-the-scenes articles and DVDs. But he teases a lot about being really tired of the whole Star Wars scene.

As it turns out, there was a reason for his calculated distance, and it goes deeper than we ever knew...

Well, obviously that was a joke. But if I were Harrison Ford...I would be seriously over all of us wacky fans constantly in his face.
Email ThisBlogThis!Share to TwitterShare to FacebookShare to Pinterest

Bruce Campbell broke the news via Twitter last week that at least one "Evil Dead" remake is in the works with his blessing and the direction of the man himself, Sam Raimi.


Personally, I'm bummed that we won't just get an "Evil Dead 4" starring the real Ash that picks up some years after where "Army of Darkness" left off, perhaps with the skeleton army invading the S Mart via a rip in the space time continuum?

How much do you want to see a seasoned Bruce Campbell play an older Ash? But I'm crossing my fingers that he's just toying with us and trying to keep his hopefully starring role a surprise. Above all else, I trust The Chin. So if he likes it, I guess that makes me okay with it by default.

Below, contributor Heather Cichos explores just one of the ways in which life as a geek sometimes intersects with her life as a mother. Bruce Campbell's announcement got her thinking...

This goes a long way toward cheering me up. The longest running fantasy film series may have seen it's last premiere...but somehow I get the feeling, the joy is FAR from over.

Movie Bites - Is It Really Time To Bid Harry Farewell?

It's Friday night and I still haven't seen the last Harry Potter movie. (Notice how I'm not even referring to it by name?) I'm holding out as long as I can. Normally I'm a midnight showing kind of gal for the big movies. But I just want to delay the inevitable, I need a few more hours, a few more days until Harry Potter is really over. But I'm coping. Today I got to go to Leaky Con 2011 as part of my new duties running "Orlando Attractions Magazine: The Show" and I recently tried to bake my blues away over at Smith Bites.


But I'm not ready...not yet. Have you seen the last movie yet? How will you cope?

Not that Harry, the other one...Han. Indy. The man. Thanks for the memories fella! I love you. I mean...uh...greetings on your day of birth. Or something else totally not creepy and definitely professional. (Somewhere out there, I imagine Ford responding to me, "I know." Le Sigh.) What's your favorite Harrison Ford movie? Mine is "Temple of Doom". 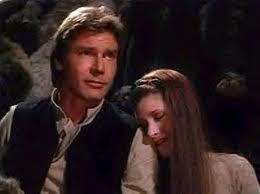 Geeks like me who love the BBC have known about the actor Martin Freeman for some time now. But lots of people stateside don't really know Martin Freeman all that well. So I want to take you through some of his more memorable roles so you can get acquainted with him before you see him as Bilbo Baggins in Peter Jackson's much-anticipated Hobbit movies.

Freeman is one of those actors that feels like he's been around forever. That's partly because he's been working for a long time and partly because there's something classic about both his look and his performances. Freeman is not a leading man. By that I mean that he's a character actor who ended up with roles that suited him perfectly, through years of hard work I'm sure. And that's a compliment. Like many audience members I'm growing really really tired of leading men and women who look like plastic dolls with massive white teeth. I'd rather see someone onscreen that I can relate to, someone who looks real and not like they've been shipped in a sealed air-tight container from a reality TV episode or the streets of Hollywood. Not to issue a back-handed compliment as Freeman is plenty handsome.

All that aside, the best reason to love Martin Freeman is that he gives great performances. Though you may remember him from smaller roles in "Hot Fuzz", "Love Actually" and "Shaun of the Dead" his comedic timing paired with his natural dialogue delivery has landed him a spot representing some of the most iconic characters of all time. Such as...

1. Dr. Watson in "Sherlock Holmes" - For this BBC version of the classic mystery series, Sherlock and Dr. Watson were brought into modern-day London and given stories that resembled the classics in clues and title, sometimes even in their solutions. But these episodes added new bits and pieces rewarding Conan Doyle's faithful readers with what felt like brand new Sherlock material. Personally, I'm a massive Sherlock fan and as such I can tell you that Freeman's performance as Dr. Watson was all at once totally faithful to the books and still somehow felt original. I know, my gushing can be contradictory... 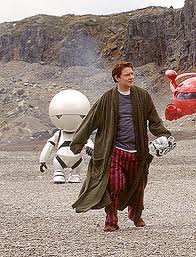 2. Arthur Dent in "The Hitchhiker's Guide to the Galaxy" - Here we have another classic piece of British literature where Freeman played our fish out of water lead. In this hilarious book series turned film, Freeman as Dent fumbles his way through outer space armed only with indignation and a confusing guidebook. This was a bit of casting that just felt right, as did the rest of the cast in this film. You know how sometimes you read a book, then you see the movie version and what's onscreen is totally different than what you imagined. Well, this movie was the opposite. Like all the Harry Potter films, Freeman as Arthur Dent felt pitch perfect.

3. Tim Canterbury in "The Office" - The BBC original version of "The Office" had Tim instead of Jim. Just as awkwardly charming, Martin Freeman originated the role in the British version of the series which was sometimes so believable in its realistic discomfort that it was hard not to watch through your hands. But Freeman's Tim was even more ruthless that Krasinski's Jim.

4. Bilbo Baggins in "The Hobbit" - And the role all the book nerds are waiting for...Bilbo Baggins himself. After the months and months of speculation about whether or not these films would even happen, pictures from the set are finally trickling in and to say that Freeman was the right choice would be an understatement. He has all that furrowed-brow worry-wartness you want Bilbo to have, with room for plenty of exuberant adventuring that the story calls the character to grow into. I don't know about you, but I'm already counting the days.

Did you know who Martin Freeman was before this? Or are you new to this British actor? 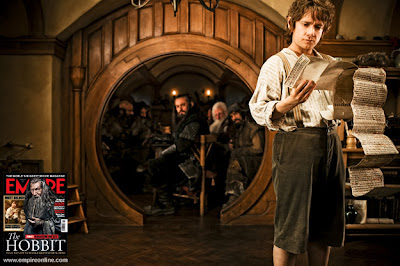