Elvira Returns (and Why It's Good for Feminism)

I've always loved Elvira, so this news recently posted by CHUD.com is welcome. As a child of the 80s, I'm nostalgic for her knee-slapping humor and sassy puns. I also love her appearance as a biker in, "Pee Wee's Big Adventure". Oh yeah, she's in there. She's the one who says, "I say we let me have him first!"

Read the article here that gives all the details of Elvira's return.

I grew up with Indiana horror host Sammy Terry, so this is a great blast from the past that, I think, will be welcome on the TV scene. Especially for anyone my age or older who grew up with all kinds of local horror hosts.

But mistresses of the macabre have always been a family favorite in my life. We grew up watching the classic black and white monster movies and we loved the Addams Family. 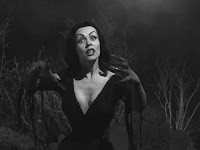 I typically argue that Elvira, Morticia Addams, and Lilly Munster are great feminist figureheads. Yes, they were all well-endowed and sometimes hilariously proportioned. Take for example the original figure from which all the aforementioned gothic ladies spring, Vampira. Her waist was cinched uncomfortably small. It's all part of the Victorian aesthetic we'll talk about it in a minute.

But they all portray strength. You may even notice that Elvira herself is always making jokes about being a black widow type. Well, this is all part of the cultural backlash that identified with Victorian Gothic (famously an unhinged time in history behind all the buttoned-up facades) and likely sprang out of the female-stifling fifties, where most women were told to get back in the kitchen and stay there. (After WWII, when they so famously stepped up to fill the roles left vacant by men who enlisted in the military. And I'm no man-hater either. Hooray men! Yay soldiering!)

Elvira and her ilk were turning a cultural stereotype on it's head. They were taking the tragic femme fatale figure and moving her toward power and victory.

Whereas beautiful blondes like Marilyn Monroe met tragic ends after a lifetime of abuse, these women were saying, "Yes, I'm gorgeous and I'm dangerous to you!" Not the other way around that so many pin-ups had to live with throughout the "glamour" years of Hollywood. (Though some will argue, those years have never ended, and they may be right. Fame is often deadly in one way or another.)

So we can see, academically speaking, how feminism can spring from forms that may at first glance appear to be solely for the male gaze. Many would argue the simple display of skin and insinuation of allure that these women present are degrading, because they are such caricatures of femininity. I would disagree. It's not attractiveness or femininity that are innately offensive, it's those two qualities when they are ONLY for the benefit of men that becomes offensive, in my opinion.

Wait a minute, am I lecturing? Oh boy...forgive me, you can tell that school is about to start and I'll be back to teaching...

I have a picture somewhere of Mom and I dressed as Elvira and Morticia for Halloween one year, I'll have to dig that up. Until then, enjoy Elvira's cameo...