Donde Esta Conando? or Why Conan Matters to Us


It's 12:30am on a Tuesday. I'm not asleep. Why? I'm bummed there won't be any new episodes of The Tonight Show with Conan O'Brien.

I'm a fan. In the nineties, my oldest sister introduced me. I was just a kid. A little night owl. I wandered into her bedroom and saw her laughing face illuminated by the glow of her tiny, boxy camping tv. He was doing a remote about truck driving. I was hooked. In my house, we were raised on Danny Kaye, so there was a sense of familiarity about this tall, witty goofball.

My husband and I went to a friend's house last Friday to watch his final episode. As he bid us adieu, Conan himself said the work he does is just comedy. The Tonight Show is just another television show. He shared other wise words. He was frustratingly mature. 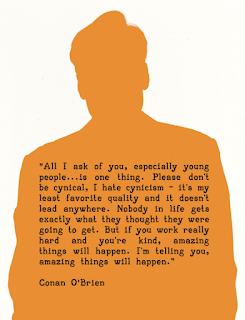 With everything happening in the world right now, there really are better causes. I can't argue with that. We've been riveted by Haiti coverage and are definitely doing what we can...though it's not much. Certainly not enough.

But it's also possible to have two feelings simultaneously. Concern for world matters and bittersweet feelings about The Tonight Show are not mutually exclusive. And here I am, up past midnight, feeling...sad. That's a mysterious ellipsis. It keeps showing up in this article. Why do I feel like I can't say I'm sad? Why do I feel the need to offer so many disclaimers? Whether I should or shouldn't feel this way is a moot point. Because I do.

I've been trying to put my finger on why exactly. Why is important. Why always matters. So let's catalog: 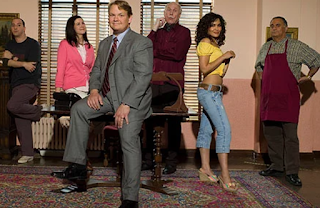 But. There's still something else.

Since the dawn of television, each generation had its turn with The Tonight Show, a time to steer the cultural ship. Conan is the host of my generation, of our generation. I was eleven when he took over Late Night. Conan was a presence in my life through jr. high, high school, college, and into my early adulthood.

Sitcoms and dramas go on hiatus, films are in theaters for a fleeting moment. But the late shows, ah, they're on almost every night, give or take a few weeks throughout the year. They're sharing current events with you. Like news anchors, they're along for the ride.

For me, Conan was a litmus test. I almost hate to say something like this, because it makes me sound like I take all my emotional cues from a TV show. That's not it. I'm a big consumer of news and a careful one at that. I'm invested in world and current events. But there was something relaxing about knowing you could turn your TV on every night at 12:30 (and 11:30 for the past seven months) and have a kind of...gauge.

If Conan was making jokes, there was a sense that everything was going to be okay. A calm. Through wars and economic crises, if Conan was showed up onscreen and made jokes, it felt like things were normal. When they weren't normal, we processed them together.

If he took a moment (or an entire show) to stop and be serious, then maybe it was time to panic. Just a smidge.

Conan is a national mascot. A generational touchstone, like Carson and others before him. He's even living the experience of finding uneasy footing because his predecessor won't leave. Something people my age can certainly understand.

After the recession, many people stalled retirement. After college, my husband and I met with a much less friendly job market than our parents did at our age. At least, that's how it felt. We were married in 2006. The year the bottom dropped out of the stock market thanks to the loan industry.

Conan will land on his feet. I have no doubt. In the meantime, we'll wait and see what he does next. But now that all the hysteria is over, all the buzz, the final Tonight Show, there's a new kind of sadness.

We were robbed of our Tonight Show. I know NBC is a big private company. They can do what they please. I'm not as entitled as I sound. I'm making a commitment not to be cynical about it, as per Conan's request. But there's a surprising grieving process that, quite frankly, is taking me by surprise.

There's something personally offensive about Conan's cancellation. As a twenty-seven-year-old woman ready to build my own career...it almost feels like they canceled me. Ridiculous as this sounds, I hope it's not a harbinger of things to come. An old guard who will refuse to go. A group who'll stall progress.

To anyone out there who doesn't understand all the fuss over Conan, that's okay. You don't have to. But there's more going on here than millions of whiners and malcontents. There's a cultural shift. We lost something we thought we were going to have for years to come, a Tonight Show that appealed to our sense of humor and our worldview, fronted by our host.

All those years we spent having to go to bed early while the grown-ups watched Carson, and now we're finally old enough to stay up, and...