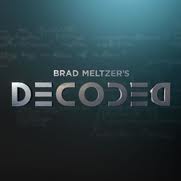 Are you a fan of the new series Brad Meltzer's Decoded? I was. I stuck with the show during it's initial year. Like all shows, it hit some high and lows. All the good shows do in their first season, it's called "development" and most networks don't give shows the chance to evolve like that anymore.

Remember how in the first episode of "The Golden Girls" they had a live-in cook named "Coco"? He was gone in episode two...gone but not forgotten. I miss you Coco.

If you like Decoded and you want the chance to win the first season on DVD, or if you didn't see it and want to watch it marathon-style in your own home, I'm running a quick contest. Of course, I guess you could also just buy it HERE. But then, you wouldn't have the satisfaction of winning.


To win, follow these instructions very carefully:
1. Email me a message with the subject heading DECODED GIVEAWAY. You can email bornforgeekdom@gmail.com (It's the title of the blog, no spaces at gmail.com)

2. Write me an awesome fake conspiracy theory! For example, "Bigfoot is actually the chief in command of an invading ground force of aliens from the planet Zebulon. And Elvis was his cousin." Or something...be much more clever than that...

3. I'll post the winner's conspiracy theory here at noon tomorrow along with two runners up. But only the winner will get season one of Brad Meltzer's Decoded on DVD. (There can be only one.)
Email ThisBlogThis!Share to TwitterShare to FacebookShare to Pinterest
Labels: contests and giveaways
Newer Post Older Post Home