Longest Blog Title Ever. I know. But I have a lot to catch you up on.

It's official, I am a citizen of Orlando, Florida. I hate to be such a cliche already, but I'm sitting here with a glass of freshly squeezed orange juice pretending I'm Bea Arthur.

Well, I guess I'm not official until I get my new driver's license. But we're all moved into our new place, I've been swimming five times and yesterday Jake and I spent our first day at a Disney park. So it certainly feels official.

We were going to be sensible. Honest, we were. Save money on our first Florida weekend. Stay in and catch up on laundry. Pet the cats.


We moved to Florida for a lot of reasons, but the theme parks are probably number one. Yes, the sunshine is awesome. The absence of a frozen tundra come this winter will be great. The massive amount of production work going on down here all the time suits our professional lives. But let's be honest, Jake and I are the couple who over three years ago started our own theme park-based webisode series just for fun. So yes, the theme parks are what we are most excited about.

Pair that with the fact that yesterday was the very last day of Star Wars Weekends at Disney's Hollywood Studios and we almost didn't have a choice. So we sunscreened up and drove the ten or so minutes (*sheepish grin*) to Disney property and went absolutely STAR WARS GEEK CRAZY.

But first I should back up. The second day that we lived here, we visited Downtown Disney. A kind of outdoor mall from heaven replete...replete I say...with fabulously themed shops and restaurants. All my life, being the Indiana Jones/adventure genre fan that I am, people have told me that I must visit a place called the Adventurer's Club. Which I was sad to see was closed... 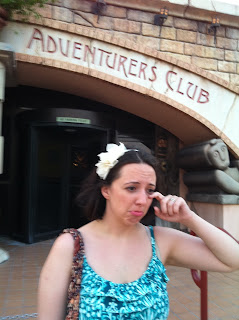 Jake was also none too pleased either. 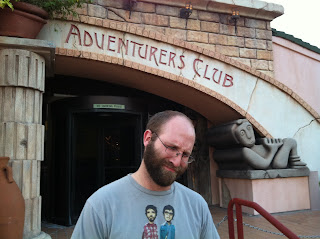 But I found a way to make him feel much better. A pint of Guinness at a lovely Irish pub and restaurant called "Cookes of Dublin" where I learned that you NEVER go to an Irish bartender and ask for "Strongbow". (An English Cider.) Instead, you order a "Magners", which is essentially the exact same thing. But Irish. 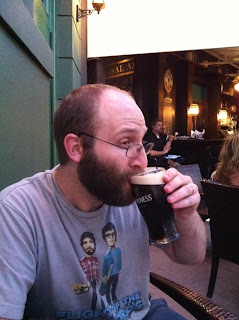 The very next night we went grocery shopping, fearing that if we didn't stock up on essentials we would happily spend ourselves into bankruptcy on all the amazing cuisine just minutes away. (Cuban food! Irish food! A GHIRARDELLI'S CHOCOLATE SHOP!)

We were behind an Imperial Guard and two helmet-less Stormtroopers who were also checking out at Publix. At this point I actually looked at Jake and said, "Have I died? Is this heaven? Is Star Wars really going to be this much of a part of our reality now? 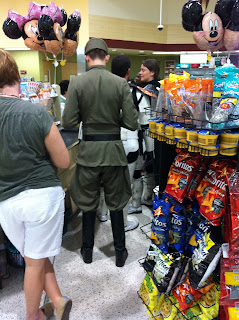 Oh yeah and P.S. I got my first call to do some video/hosting work for Orlando Attractions Magazine on Friday. To see a special sneak preview of Star Trek: The Exhibition at the Kennedy Space Center. A place I have dreamed about visiting ever since I saw Space Camp in fifth grade.

I may or may not have shed a tear or two sitting in the back seat as we approached the building. Best working day of my life so far. Though I admit it was super weird not working with Jake behind camera. We need to get all our California episodes of Park Geeks out ASAP. 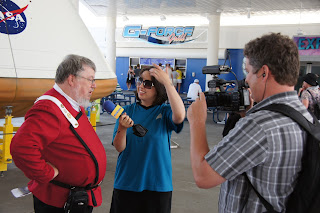 But enough of all this catching up nonsense. Let's talk about Star Wars Weekends. At the gates, crowds were greeted by stormtroopers scanning for Jedi and Star Wars music blasting over the loudspeakers. Again...a tear or two (of sheer joy, I assure you) were shed. 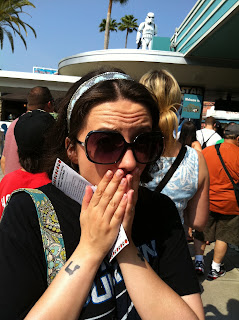 In case you missed it and you were wondering, "Why on Earth would she post a photo of herself making a face that gives her Sharpay forehead?" Look again, above my head and a little to the right. Stormtrooper!

There were dozens patrolling the parks all day. In fact, EVERYONE was in the parks. Vader, Luke and Leia, even the Mos Eisley Cantina Band was out and about. 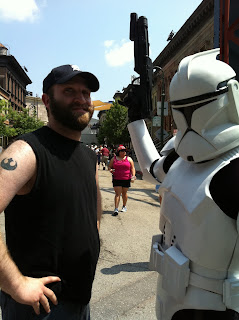 Don't call him a Stormtrooper...he's a Clone Trooper. Get it right. *pushes glasses up nose* 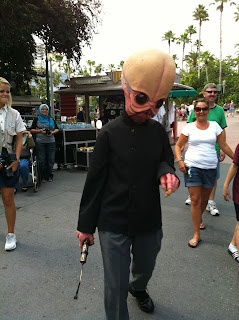 See? More Jedi than you can shake a stick at. I wouldn't do that if I were you though. 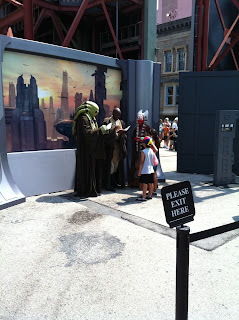 By the way, that included celebrities. As you can see from the second photo below, the incomparable stunt genius Ray Park was there. Luckily I got to see all the visiting celebrities in the 1:00 Star Wars parade that rolled down the main drag like an answer to a geek's prayer.

During that time I was far too busy screaming the way Will Ferrell screams at Santa in "ELF" to even think about taking pictures. This same phenomenon overtook me when I accidentally ran across Peter Mayhew as he was being wheeled (broken foot I think) past me to an autograph session. 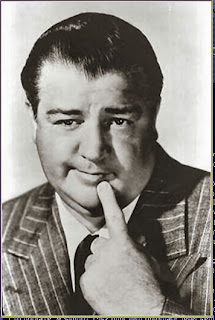 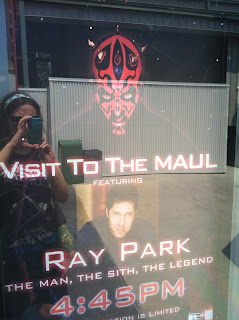 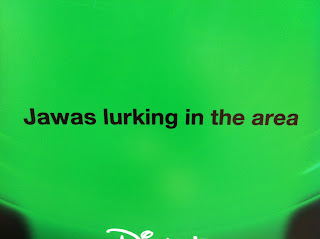 But none of that is even the best part. The best part is the brand new Star Tours ride. Star Tours has been around for years and years. I first visited with my mom, aunt, and cousins around the time that the original ride opened.

There's been so much buzz about the new version of the ride that I tried to ignore completely because I wanted to be surprised...and boy was I surprised. And I want you to be surprised too! So I'm not sharing details. But I will give you some pictures from the ride line and some great shots of Star Wars merchandise from the event tent aptly named "Jabba's Hut". 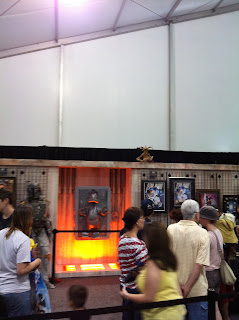 That would be a Donalf Duck version of Han in Carbonite and if you look very very closely you will see my very favorite henchmen sitting near him on the top right. I heart Salacious Crumb. 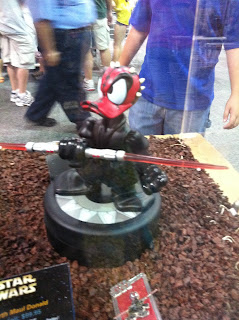 No explanation neccesary for these right? 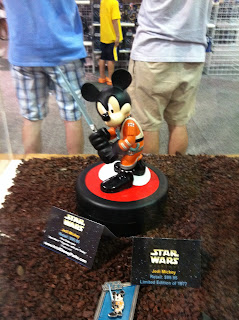 And now for the ride photos..well, line photos. But still. If you don't know, Star Tours follows the story that you're boarding a tourist shuttle in the Star Wars universe. Much like an airport, the line takes you through security and you can also see when flights are arriving and departing. You can even watch C3PO and R2 running pre-flight checks.

(I'll share videos below. Sorry for the jumpy quality, it was shot on my iPhone and I don't have a very steady hand with it yet. I'm used to shooting with a regular camera.) 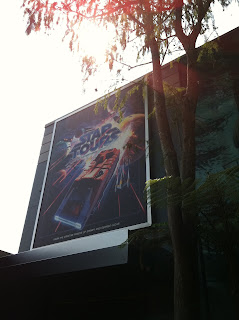 The outdoor portion of the line is built to look like Endor. No Ewoks though. Bummer. 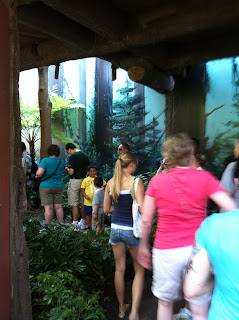 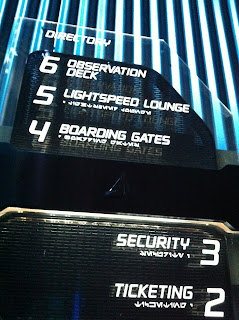 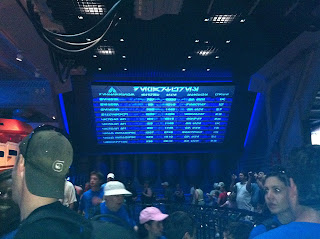 The line has a million little details and flourishes that fans of all ages can appreciate. The level of theming at work here is stupendous. It feels like Star Wars fans get the most love back from their creators out of anyone. All this! This little slice of "Let's all play pretend that Star Wars is real life together for a few weekends." Just for us? Amazing.

We should all be more thankful to Papa Lucas. (Did that just get weird? Too far?) Anyway, there are also lots of references to the original ride that I appreciated. Including a pilot droid you may recognize, with some occasional flourishes of Paul Reubens voice-over still in play.

Anyway, there was a fun little silhouette section of hallway in the line that I wanted you to see. Of course, when I pointed the camera at it, the fun ones stopped coming by. But still, I want you to get the idea. Here's some video. When you  visit, try to spot recognizable characters and Star Wars species as they pass. If you get motion sickness, you may want to skip this one.

Well, I gave myself an hour of my morning to write a quick catch up blog before it was back to work for me. I'm sitting under a pile of work. All fun work, of course. But work that must be done nonetheless. Being the realist that I am, instead of giving myself the week off to move, I tried to continue working. Bad idea So now it's catch up time.  Lots of editing and VO and writing.

So here is where I leave you, with the promise of another very cool post coming this week...from Geek Heaven, Wish You Were Here!!! Enjoy the view from my new office. 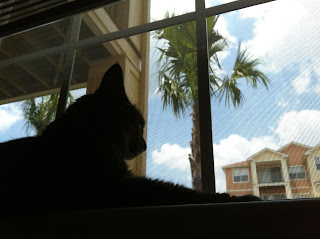