In addition to a theme for each year, I like to choose a character study.

Having a character inspiration doesn't mean I dress like that character or do what they do, it just means, I pull inspiration from something that I like about them.

My Character Inspiration for 2012 was... 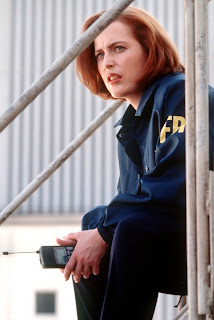 At the start of 2012, I was feeling pretty drained. I was only six months into living in a new state and I still felt like I was in a whirlwind. I liked the idea of choosing a character who was strong in resolve, someone who was a healthy skeptic and someone who was an independent person. Dana Scully is a tough and disciplined character full of traits I needed to emulate at that time.

But 2013 is beginning in a very different way. I'm rested. I'm feeling prepared after a lot of very specific, focused hard work in 2012, especially in the fall. While, of course, nobody is every really in control of big life events, at this time, I'm feeling a lot more centered and self-aware. 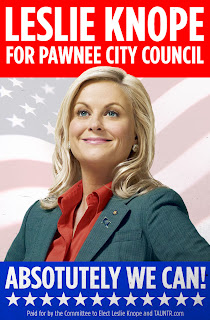 Leslie Knope is a wonderful role model. She has a strong conscience and very strong convictions. She's intelligent, motivated, not afraid to be different and she's a loyal friend. She's feminist, she's fast to admit when she's wrong and she's not afraid to be successful or go after what she wants, even in the face of strong opposition.

But most of all, she is well aware that her ambition and her ideas annoy people...but she just goes RIGHT ahead and pursues them anyway.

Being outgoing is not the same thing as having a backbone. You might be surprised to know that. Being outgoing or extroverted can mean you accidentally spend your energy on entertaining others instead of taking care of yourself or your family or pursuing matters that are important to you. Which can be a runaway train that takes you away from your best intentions much more quickly than you ever thought it could.

I've always been outgoing. This year, it's time to use the backbone. Not to earn one by the end of the year. To start using mine right away, today.

Leslie Knope has this way of being kind AND barreling through obstacles while somehow maintaining positivity.  It's what makes her such a funny and ridiculous character. The very idea that there's such a thing as a clean and honest politician, in and of itself, is what makes her so interesting. She's such an optimistic character. But I don't think it's because she, as written, doesn't hear criticism. She just doesn't give quarter to it when it comes from untrustworthy sources. The woman is a machine. I'd love to access some of her better-written qualities.

How about you? If you could rob a fictional character of any of their qualities, which one would it be and what would you take?
Email ThisBlogThis!Share to TwitterShare to FacebookShare to Pinterest
Labels: feminism, Funny Women, Holidays, TV
Newer Post Older Post Home