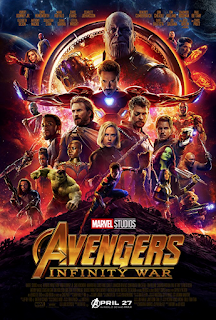 To be honest...I didn't love it. I didn't go back to see it again, which is almost unheard of for me. So....yeah. Still processing.

The great Marvel Rewatch of 2018 has concluded. I hit everything except the first two Thor movies.

Before I head out to Avengers: Infinity War tonight, I wanted to record my predictions.

1. I think they all die, including one or more of the Eternals*. Tony's vision in Ultron was foreshadowing. The man is a genius. It wasn't just his fear Wanda saw, it was that big beautiful brain of his working through multiple probabilities.

There might be one survivor at the end. It should be Ant Man or Dr. Strange, but it will probably be Iron Man since he's the father of the MCU, by way of Jon Favreau. Whoever they may be, I think they'll use one of the infinity stones to go back in time or to an alternate dimension to change things for the next movie.

The final frame or bonus scene will probably be a Back to the Future-esque scene of the lone survivor meeting Captain America during World War II. Cap will say, "Who are you?" The character will smile and we'll cut to black.

2. Black Widow will die protecting Captain America or vice versa. Those two are bros4lyfe. Actually, Cap owes her more than a few favors by now. If we're never gonna get a Black Widow movie, I hope our talented and illustrious spy gets more of the attention in this movie and the next. She's second in seniority out of the entire cast. Please give her more to do.

3. Someone will use the time stone to send Cap back to see Peggy. OR they'll use the mind stone to make him believe he's back in time as a way to temporarily distract him or take him out of the fight completely. I know, I know...wishful thinking and how I am the king of it. I just really want a Peggy cameo.

4. Thanos will be more reasonable than we expect. All great villains must be correct in some way in order to be compelling. Marvel is great at sympathetic bad guys. Loki was kinda right about how humans were made to be ruled or dominated during vacuums of power. Ultron was right that we were killing the planet. (For the record, I still love that movie and I don't understand the mass hatred.)

Random relevant quote: "You're not wrong Walter, you're just an a*@hole."

5. I hope Red Skull shows up. I realize that's not much of a prediction. His absence still bothers me. I've always believed he was meant to be the big bad of Marvel's phase one. I thought the tesseract opened some kind of generic version of the bi-frost and transported him...I don't know...some kind of place.

I thought for sure he'd show up in Thor's universe at some point until all those reports surfaced about how much Hugo Weaving loathed the makeup process and swore to darken Marvel's door no more.

But it would be really great if he ponied up for a cameo to tie up that loose end.

6. One or more of the female characters form friendships. So many of them have been relegated to being the only woman on their team. It would be great if one of the Wakandan warriors commented on this in a humorous aside. Come oooooon, Bechdel...mama needs a new pair of shoes.

7. I think Hela could be percieved as the Goddess of Death and I think that's who Thanos is smiling about at the end of the first Avengers when Wesley from Buffy in prosthetics says, "...is to court death." Run on sentence, I know. I'm just...I'm amped. As mentioned in point number 4, I think Thanos will have a rock solid reason for being the Mary Poppins of murder.

I have a lot more thoughts, but I'm almost too hyped to put them down right now. I've thought maybe Vision or Loki might somehow pose as one of the other heroes at the end because said actual hero is dead. And I don't know...other stuff. Is it Christmas morning yet?!

I'm pretty much a sugar-crazed toddler right now. I've been worried about Infinity War and worried about the Russo Brothers making things so dark that the movie won't be fun to watch. But the spoiler-free reviews I've read say otherwise, so I'm officially excited.

What do you think will happen in Infinity War?