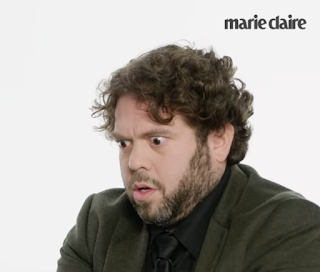 Forget the fact that Dan Fogler is a charming, hilarious gem. Forget the fact we're all discovering Ezra Miller's edginess. Just. Please, please watch this video from 3:03 to 4:45 for a good laugh.


Ooh, ooh...how about a show called Dan Fogler Reacts? Where we just show Dan Fogler weird stuff and he, you know, reacts. I'd watch.

For the record, I love it when actors get fatigued during press junkets. I know it's schadenfreude, but it's funny schadenfreude, which is the best kind. Also, it happens a lot, mostly because actors get locked in rooms for hours on end where they're forced to answer the same three or four questions ad nauseum. It's enough to make anyone slap happy. But this is a new level. A whole. 'Nother. Level.
Email ThisBlogThis!Share to TwitterShare to FacebookShare to Pinterest
Labels: Movies
Newer Post Older Post Home