3 Movies to Watch When You're Done with Black Mirror's Bandersnatch. 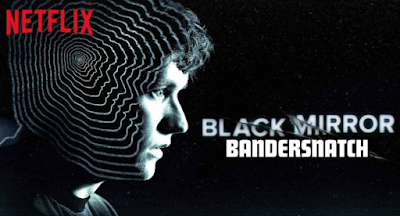 So. Bandsersnatch. Here are two weird things that immediately preceded our viewing:

1. In an attempt to reach sixty blogs for 2018, I combed through old, unfinished drafts. One was about fan theories, specifically, about LOST being a psychological experiment.

2. My sister showed my best friend her favorite episode of Black Mirror titled Play Test. Which is thematically relevant, to say the least. I also talked to them about how true to the simulations industry and scenario design the episode really is. If I were insane, this would be a bad time to be...well...insane.

Luckily, I'm not. First, I'll share my favorite ending. Then, I'll give you three movies to cleanse your palate of the Black Mirrory-ness of it all.

We enjoyed several endings, none of which I will ruin for you here. After trying several variations of choices, I chose to end my experience with the "Do you want more action?" ending. Not only is it true to the era of the story, but it's also funny and self-aware. Two of my very most favorite things, especially when they're thrown together. If you need a palate-cleanser...

They'll take you back to the real 80's and put you in a great mood.

1. King of Kong: A Fistful of Quarters


3. Raiders! The Story of the Greatest Fan Film Ever Made

Remember when the world was simple? When the Thompson Twins were new? When Indiana Jones was young? When you could go to Jennifer and Kimberly's house and play Donkey Kong and Pong? When you were connected to the world around you and the summer smell of freshly mowed lawns left you to adventure in your imaginations instead of the internet on a tiny box phone?

Okay, Audrey. Oddly specific. I guess Bandersnatch messed with my head, shifted me firmly into Nostalgia mode. Anyway. Music played an integral part in Bandersnatch, yes? Here's another movie moment for you that made excellent use of an 80's song.


Where's your head after Bandersnatch? Are you feeling any better yet?