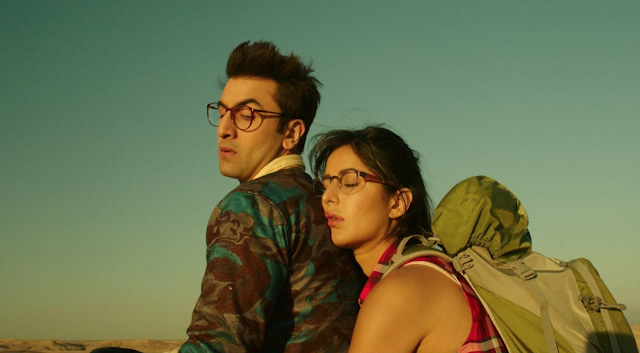 I love foreign film. Or as it's called in the originating country of each movie...film. I've waxed quixotic about the unsettling Swedish genius of Ingmar Bergman and the vulnerable, gut-wrenching glory of Francois Truffaut. Movies from Norway like Troll Hunter and New Zealand's Housebound blew my mind. The Host has one of the greatest scenes in modern movie history.

I grew up watching all the old Godzilla movies with my oldest sister...without subtitles. I just love movies. Where they come from is irrelevant to me.

But the Indian cinema affectionately dubbed "Bollywood" is what I return to most frequently. Anything lost in translation because of cultural differences only adds to the anesthetic effect of the world's most beautiful films. They remove you from your life so thoroughly, so pleasantly.

That said, I want to recommend Jagga Jassoos on Netflix, a Disney-backed musical mystery (Yep. A musical MYSTERY.) situated around a clever conceit. The lead character, Jagga, lives with a stutter but can sing freely. Hence the musical format.

It's a film that's quirky, at times inscrutable, visually stunning, and highly rewarding. If you like Amelie or any of Wes Anderson's films, this movie is for you. Please know that you'll need one or two rewatches. So many people go into international movies expecting ultimate clarity. But it's okay to be confused sometimes. Bewildered, even. Rewatches help. They're good for your brain. Says who? Me. A brain scientist.

Just watch Jagga Jassoos with an open mind and an open heart. Please?

Anyway, about the lead character, Jagga. Anyone who lives with a quality or four that makes them different knows that uniqueness tends to push you toward the fringe and the fringe is where you develop expertise. In Jagga's case, he's become an observational mastermind. A detective, albeit an unofficial one.

I want to zoom in on two musical numbers and discuss how they demonstrate the film's refreshing sincerity. Here's the first.

This song takes place halfway through the movie. Jagga has already been on a major adventure with our heroine, a journalist named Shruti. Shruti was following leads and trying to solve the murder of a murdered colleague, which led her to Jagga's hometown. Jagga helped Shruti escape safely after she got a little too close to danger.

After this, he tries to get back to his regular life. But he can't get the tenacious, clumsy writer off his mind. So, he leaves town to go and find her. Upon arriving at Shruti's apartment, he discovers a party.

During the celebration (and this song) he's glancing around and gathering clues. He realizes the slain journalist was Shruti's boyfriend and this party is a celebration of his birthday, making it something of a funeral. The main chorus, in English, translates to:

They left
They all ate food, drank alcohol, and left
They left, they left

The song is filled with slightly inebriated party guests that works on a literal level. But it's also about a group of people trying to deal with the overall concept of grief and loss on a grand scale. It lends a lot of extra significance to the line, "They left, they left," if you read it that way.

Even the small bit of choreography showcases intentional awkwardness-the goofiness of being human. The dancers form a conga line, symbolizing how everyone goes the same way in life. Some of the funnier facial expressions played for comedic effect could be seen as looks of fear if you press pause.

The performance of lead actor Ranbir Kapoor communicates intense compassion and sensitivity as he realizes what's unfolding around him. The bridge of the song leaves no doubt as to the intention. Translated into English, it means:

It helps to have context, to know just how different this movie is from the standard big-budget musical, which never lost momentum in India like it did here in America. For the record, I'm a fan of the gigantic, glossy productions that regularly release there.

Here's a good example of the massive scale of some of these movies. This is the grand finale of 2014's Happy New Year:


Just like any other country, India has movies of every genre. Another favorite of mine was 2015's independent Angry Indian Goddesses. It takes, "I am Spartacus," to beautiful new levels of relevancy. Highly recommend, but back to the matter at hand.

In Jagga Jassoos, each musical number advances the plot. Average-looking people from every age group are featured throughout the movie and given places of significance in musical numbers. The actors aren't wearing elaborate costumes. The dances aren't always slick or perfect.

In fact, some of the moves reflect Bob Fosse in their intentionally awkward configurations. The entire movie is a celebration of connections and bonds. The musical numbers reflect that intimacy in both scale and symbolism.


What do I mean by awkward? Well, I mean it in a good way, a modern contemporary dance way. Check out a couple samples in the caption above before you watch the next number below, Ullu Ka Pattha, for an example. Here, our main characters are searching for Jagga's long-lost father across Africa while also dealing with their growing, confusing feelings for each other.

The dance is joyful but jarring, just like falling in love.


I'm sorry to tell you this movie didn't do well in India. But I love it. Truly, madly, deeply. I tend to absolutely cherish the movies audiences in India are currently rejecting. I can't explain it. Thugs of Hindostan? Adored its extensive treatise on colonialism. Jab Harry Met Sejal? I thought it was a feminist masterpiece making a sincere effort at a progressive plot and a modern love story.

The thing about art that reaches into your heart and squeezes is, it reminds you of who you really are. It holds up a mirror. Great film teaches us about its subjects. But humans are innately self-centered, so they also teach us about ourselves.

Jagga Jassoos is a movie about a well-meaning weirdo who lives just to the left of society. He finds a way to retain his unique sense of self while helping others with his gifts and talents. He sings and dances his feelings. But maybe that's just what I want to see. Maybe he's who I wish I could be. And that's okay because great art should also push us to reach our potential and follow our feelings.

Watch it and tell me what you see. Two of the best musical numbers can't even be found on YouTube right now, so the movie still holds plenty of surprises. But how about one more for the road?

Here's Galti Se Mistake, a number ostensibly about puberty and the exuberance, self-consciousness, and the inevitable failure of first love. It's weird. You'll love it.


Kinda...Chaplinesque in its movement, don't you think?
Email ThisBlogThis!Share to TwitterShare to FacebookShare to Pinterest
Labels: Bollywood, Classic Film, Movies, On Film, This Would've Made a Better Video
Newer Post Older Post Home