You know, I've never been one of those people who believed that death "comes in threes". I think it's silly really. If you want to think about death coming in numbers, not to sound morbid, but try thousands.

Okay...to be morbid. Just for a moment.

People die all over the world, all day, every day. The regularity of the occurrence doesn't make it any less scary or emotionally painful for those of us left on this side of the great beyond. But there's no reason to be superstitious. (I say, while wondering if I'm typing this as some kind of subliminal precursor to my own sealed fate.) But I do believe that as I'm getting older, what people really mourn as their favorite celebrities or personalities die is their own youth.

When I was a kid, it didn't hurt me when someone like, oh say, Frank Sinatra died. Why? Because I hadn't grown up listening to him. I knew it was a big deal when he passed, I just didn't feel it. Now, as I age, death packs a different kind of pop-cultural wallop.

Lately, many celebrity obituaries have made me wrinkle a brow or shake my head and say, "What a shame." Cyd Charisse, Bettie Page, amazing character actors like Paul Benedict (Who I remember best from, "The Man With Two Brains" and "This Is Spinal Tap".)

But the one that hit the hardest? Majel Barrett Roddenberry. Any woman who can be onscreen with Patrick Stewart and just OWN the space deserves major respect as an actress. It feels like one of my aunts has passed.

She wasn't just the voice of the U.S.S. Enterprise to me, she was the voice of my imagined future and what I hoped the world could be like someday. Rest in peace, Majel. Thanks for the good work. 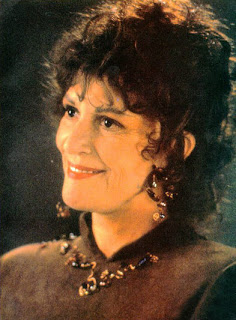