Don't listen to us Lucas!

Do what you mentioned a year ago HERE. It's your creation, you can do whatever you want with it. If I could collectively cover the mouths of all of the disgruntled geeks of the world, I would. We all have our points, I know. And I'm not saying we're always wrong. But right and wrong don't matter at this point. I don't want Indy to die...


I was writing THIS today and I was inserting some links. Naturally, I linked to IMDB's Crystal Skull page. After my article was done and published, I went back to wander around on the page some more, just browse for a little while. Then I got into the comments section. There were some good solid discussions. I myself was on a roller coaster about KOTCS last year when it was released, right about this time actually.


But as the year has gone on, I don't care about all the things I initially complained about. I care, of course, but not enough to never want to see another Indy again. I just want them to make another one, as soon as humanly possible. I'm an addict and Lucas is my pusher. I NEED more Indiana Jones.


"Temple of Doom" is a film that I absolutely LOVE. But I know a lot of people who hate it so much they wish it had never been made. Well, maybe "Kingdom of the Crystal Skull" can just be the new Temple of Doom. A weak entry into the series, not everyone's favorite, but one that people can allow themselves to like. I own it. I watch it from time to time. There are things I don't like about it, but there are things I don't like about every movie. That doesn't mean it should be disowned and the franchise abandoned.

I've been at a crossroads lately. I almost crossed the line into that kind of fanhood that just feels miserable. Where you hate everything because you're a purist only. Where you can't ever have fun at the movies because you're just counting the mistakes. If I was that rigid and unforgiving when I was a kid, I wouldn't even like any of the movies that I love now...Star Wars, Indiana Jones, Star Trek, Back to the Future, and more.

I was becoming a snobby fangirl instead of a geeky fangirl who actually loves what she obsesses over.

So where was my turn-around? The new Star Trek.

You see, Star Trek has taught me a lesson. One that seems counter-intuitive to everything I've been taught over the years. It's that nothing is sacred. Our beloved franchises CAN be resurrected. I have hope again, I feel less cynical. Less like the "nothing ever makes me happy"
movie geek and more like the, "bring it on" kind of fan.


So I'm changing my tune. I'd like to see the team ramp up for ONE MORE try. Bring Shia back, hurry and get Harrison signed before it's too late. Give it another go, leave the sci-fi behind and get to work! Don't mind our grousing about details and aliens and CGI. We'll be good this time, I promise. If I have to personally clamp my hand over the mouth of every negative, Nick Burns-type whiny geek in order to see it happen...so help me, I'll find a way... 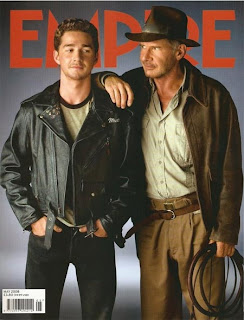