Because sometimes there's just too much geek to be contained by one franchise and universes simply must collide to create epic (or at the very least, nifty) crossovers. Today I present to you a very six degrees of Kevin Bacon Top 12 list, sans the Kevin Bacon.

Here are just a few of my favorites, tailored to my distinct geek tastes. This list is by no means complete. Feel free to share some of your all time favorite geek crossover moments in the comments...

The cast of Next Gen met fairly often with the universe of the literary world’s greatest sleuth via the Holodeck. It was always entertaining. In fact, Moriarty became something of an arch nemesis for Captain Picard and the character of Sherlock became a way for Data to study humanity in a relatable way...through the delicate and unfailing art of logic. 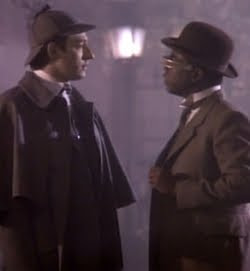 Almost the entire original Star Trek cast appeared in one of the funniest Futurama episodes ever, “Where No Fan Has Gone Before”. Only Futurama could manage to mercilessly mock and simultaneously pay loving and detailed tribute. Poor Welshie... *Hangs head in sorrow* 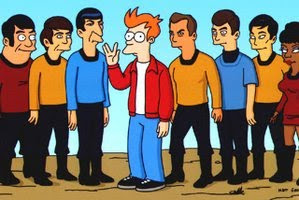 3. Futurama meets Lord of the Rings

It wasn’t quite as direct as the Trek crossover, but Futurama did spoof, “Lord of the Rings” in, “Bender’s Game”. (And yeah, I know...it's more D&D, but it counts!) 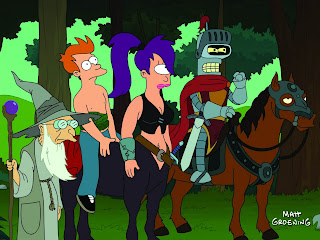 4. Lord of the Rings meets the Musical

Yes, there is a Lord of the Rings musical, and word on the street is, it’s actually quite amazing. Well hang on a second, finish reading this before you run off and Google for ticket prices. (Yes, there is such a thing as a musical geek by the way. Ever been to a showing of, “Wicked”? Attend and you’ll see true fan devotion. Musicals and geeks get along quite well. We heart memorization.)

It ran in the UK for a good long while, and began running a German speaking production in Cologne last December. After that, a touring production went international…cross your fingers that it makes the leap over the pond sometime in the near future. http://www.lotr.com/home/

Lots of shows have had musical episodes; Scrubs did a great job with one of their own once. But perhaps the greatest musical episode of all time belongs to the Buffy Franchise.

Joss Whedon’s clever show did more than great Halloween episodes; they did a smashing and complete musical called, “Once More With Feeling”. The tunes are catchy, the plot is fun, and the cast did really well with the task of singing. http://www.buffymusical.com/
(For the opposite of this episode, check out, “Hush”. Truly creepy.)

I know…not technically a crossover, but how amazed were you when you saw the Buffy movie back in the day and later learned that Paul Reubens was the head henchman vampire? (To Rutger Hauer no less...oh, how I miss the 80's! Where are all the blonde supervillains nowadays?)

Paul Reubens is a comic genius. “Pee Wee’s Big Adventure” is one of the greatest unsung films of all time. So on that note… 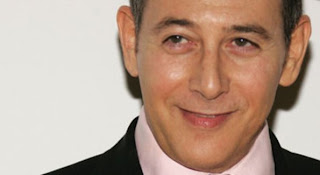 If you haven’t seen The Star Wars Holiday Special, find a way to make it happen immediately. Carrie Fisher sings, you meet Chewie's family (including his elderly father, "Lumpy"), and Bea Arthur guest stars. Go I say! Google away!

(And for some extra geek fun...track down the RiffTrax version featuring some of the talent behind the MST3K series narrating. It offers comic relief in a sometimes long-suffering and difficult to sit through pop-culture relic. It's worth it to be able to say you survived though.) 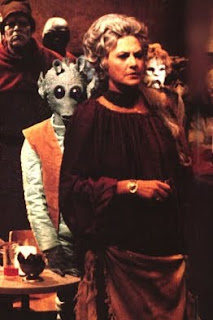 Sidebar: Harvey Korman makes an appearance at one point, and can I just say that his costume really looks like, "Mom" from Futurama. I think I know where they may have gotten their inspiration. Is it just me, or... 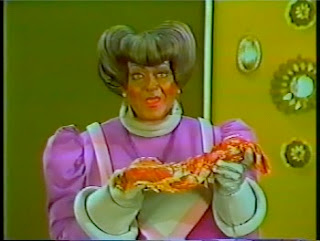 I know, I skipped a link in the chain...what can I say, “I’m a loner Dottie, a rebel.” If you’re not a Disney geek, you may not know that Disneyland and Disney World hold something each year called, “Star Wars Weekends”. That’s on top of the Star Wars simulator ride, “Star Tours”, which is kitschy fun. Though not for long, as it’s set for a serious rehab in the near future. There’s plenty of Star Wars merchandise in the park as well. Not geeky enough you say? Oh, how you doubt me! Watch this…

Some of the most incredible tattoos I’ve ever seen have been Disney-inspired. There are plenty of amazing sleeves and portraits inspired by the Haunted Mansion, the Nightmare Before Christmas, and much more. This one’s from my friend Lacey…ain’t it a beaut? If you have pictures or know someone with a great Disney tattoo, send them my way! I’m collecting. 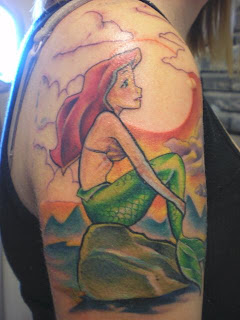 Pick up any tattoo magazine and you’ll see that tattoo culture doesn’t stray far at all from mainstream geek culture. I’ve seen some stunning depictions of famous movie monsters, Trek and Star Wars symbolism, and so much more. (I’ve got my rebel alliance tattoo as well as some Trek ink.) Geeks are sentimentalists, and nothing says lasting devotion like body art, so it’s a natural fit. 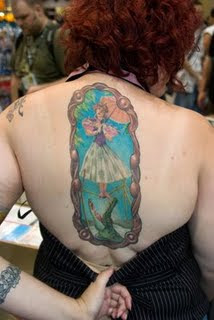 There are plenty of other Geek Crossovers out there, such as the time Quentin Tarantino had a bit part on, "The Golden Girls" as an Elvis impersonator. Oh...it happened.

Geeks, successful and famous or otherwise, tend to embrace each other, appreciate each other, and if I may take a moment to brag, they're usually intelligent with tastes trending toward the comedic and clever. (They're not afraid of run-on sentences either.) Which means literature usually shows up as well as scads of references, winks, nods, and nudges to the diverse pop culture entities that they identify with and relate to.