Back to the Future 25th Anniversary Event at the Hollywood Palms 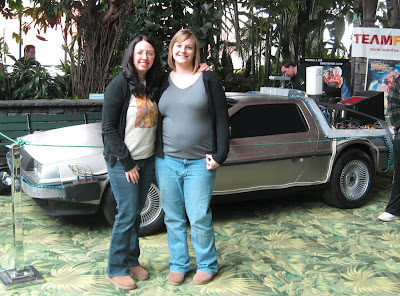 First, I'll tell you about the event, then we'll delve into what it was like to see it again on the big screen.

For starters, I've never been to the Hollywood Palms before. And, wow. This place is a movie geek paradise. It's how every movie theater should be. It provides an experience, which is what "going to the movies" once was and should be again.

We arrived, we toured the Deloreans, the Back to the Future soundtrack played on the speakers, the TEAM FOX table was there to make a difference, and lots of fans were buzzing around among the hundreds of movie posters that plaster the walls.

We headed to our seats. This is a dine-in theater, so I order the Portabella Lugosi Burger, Jake gets the Arnold Schwarzenburger and we steal some of Lindsay and Joe's Lord of the Onion Rings. Just as my face is full of food, Lea Thomspon, Christopher Lloyd, Claudia Wells, and James Tolkan arrive.

We were in the second row. I can't tell you how surreal it was to come face to face with these actors with a face full of onion rings. It kind of felt like that universal nightmare of showing up to class naked. There was no hope of looking cool. So I just gave up straight away. It was liberating.

Then the Q&A began.

I just kept thinking, "Here I am with my sandwich, and there's Doc Brown, Judge Doom, Uncle Fester, Kruge, Professor Plum, and even that terrifying headless professor from one of those Amazing Stories episodes that gave me years of trauma. One of the greatest character actors of all time. What could I ask him that he hasn't been asked a billion times already?" So I had to sit there and suffer through well-meaning but lame questions like, "What's it like to live in California?" 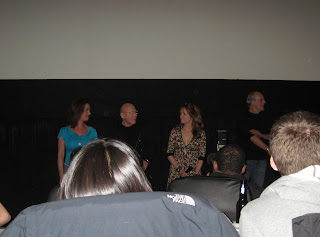 Lea Thompson was hysterical and witty and totally down to Earth. Outside of Back to the Future, one of my favorite movies as a kid was Space Camp. Her character made me feel slightly more okay with being a science nerd. When we met later, she was kind and calm. We talked about Harold and Maude. She mentioned that she just booked a new series from the people who created Monk. So look for that. 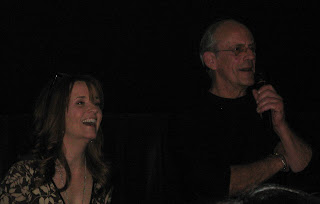 Once the actors were finished with the questions, they headed out. I was the only one who thought it was a good idea to give a standing ovation. Awkward moment #2.

Then it was time to screen the film. It's an entirely different experience watching this on the big screen. I noticed things I've never noticed before. The script seemed so tight. It's smaller than I remembered, with the exception of the clocktower and the dance, almost everything takes place in houses or the high school. The movie had a tone, a look, and a feel that I think cynical audiences today might not accept if it were released now. It's a happy film, inarguably populist, and more slapstick than I've ever noticed watching it on the small screen.

True, we were in an audience full of established fans. But I've never laughed so hard at Back to the Future before. Every face Doc Brown made got uproarious laughter. The clocktower sequence felt tense. This was a movie MADE for the big screen. Remember a time when movies were just for the big screen? Kind of a crazy thought now. Every scene, every bit of dialogue, and every visual detail belongs up there, writ large. 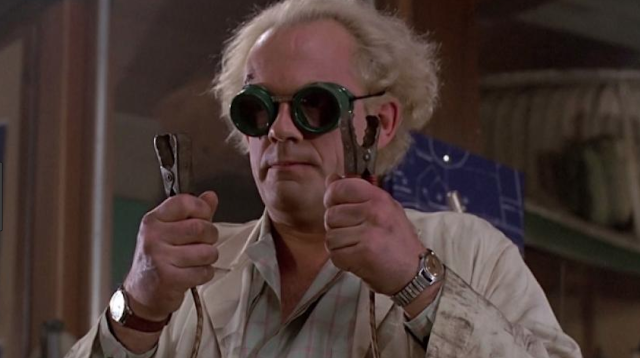 It made me wonder, how has filmmaking changed now that directors are thinking about DVDs and laptop screens?

In fact, I decided to use the movie for a teaching presentation I had to do the following Monday. I decided to expand that day of teaching into a full week. I thought we'd do a section on revision, so I went digging for original drafts of the script when I got home. I watched the special features again on the DVDs. This movie was so expertly crafted. Bob Gale's first draft is a bit darker and harder to believe with way more characters. (The nuclear fridge is in there Indy fans...*shudder*)


(That fake letter from a car salesman, you guys...and the college professor.
Also, "Dear Back to the Future..." lolololol)

Even some of the shot scenes that hit the floor are telling. At one point in a cut scene, Doc Brown pulls a Playboy out of the suitcase he packed that was in the Delorean. That scene was cut, likely because they wanted the movie to be as kid friendly as possible and so we as an audience wouldn't feel weird about Doc Brown. And what would it have added except a laugh for half the audience? Nothing. So it hit the floor.

If only writers and directors weren't so precious with their films today. Today, they'd probably throw five more Playboys in the scene and give him a two pack a day smoking habit just to make it feel edgy. But there's something endearing about the cleanliness of the film that contributes to its classic status. Charming, even. It's safe, it's fun. We can cheer for the good guys all the way because they're genuinely good guys, not just our protagonists.

Something else kind of magical happened. For the first time, ever, I identified with the characters of George and Lorraine. My entire life, I've always seen myself as a Marty or a Jennifer. But this time, Jake and I even found ourselves a little choked up at the arc of the parents. George McFly is an aspiring writer (ding), trying to find a way to build a life doing what he loves (ding), and eventually learns that all it takes is some confidence in yourself and the ability to stand against resistance time and again (ding) to end up as a successful writer with a happy life.

We are the ones who can change our own future. (DING, DING, DING!!!)


So it's not just the nostalgia of the film or the love of the actors or even the super cool theater that made the event memorable. It was the power of the movie, the way it can grow and change with you and still speak to you on a different level than it did 25 years ago. That's what makes a classic. Not the latest special effects, not the most contemporary actors, the timeless score, and not even the most unique plot. (Kids vs. Bullies)

After the movie, it was time for the meet and greets. 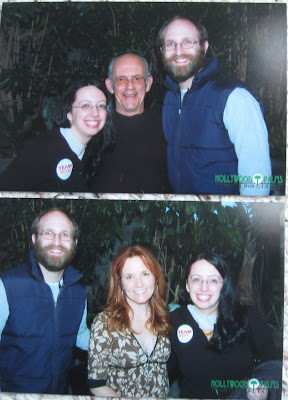 For the record, I went in to shake Lloyd's hand and he pulled me that close. So I was still being a good non-psycho fan at the time even if it doesn't look like it.

Thompson was what my sisters and I would call, "one of us". She had the same rambunctious sense of humor. I also felt a lot of deep, very sincere respect for her. The whole meeting was a very girl power for me. There was nothing about her that was rushing us off or nervous. Which is rare in a celebrity encounter.

Everyone there was genuinely thankful for the fan appreciation, we got to shake James Tolkan's hand and say hi to him. Jake talked to him briefly about Top Gun. He may have saluted him.

Listen, you can tell the geeks to tone it down a bit, but you really can't ever get us to behave like normals. Thankfully, Tolkan got a kick out of it and saluted back. We heart character actors and if we ever get to make a proper full-length movie, we'll fill the whole blasted thing with them.

So what's the takeaway?

Back to the Future is one of those movies that could've been awful if attempted the wrong way. Just think about how gonzo the plot is. But because the movie as a machine is firing on all pistons, it works. Zemeckis, Spielberg, Gale, the actors...everyone took what they were doing completely seriously and that's why they pulled it off. Commitment. Lucas and Spielberg did Star Wars and Indy because they loved those genres. Zemeckis usually does the same. It's the heart and intention behind a movie that makes it resonate with audiences.

This leads me to believe that it's not the idea for a film (or book or script or story) that's inextricably good or bad. Sort of like band names. If Pearl Jam had never hit it big and you saw their name on a flyer on the street today, you might think it was lame. But their music carried them, and good storytelling carries movies. Not plots. You have to prove your mettle. Give it your all.

That's my takeaway, but I'd love for you to revisit one of your favorite movies and figure out yours.


Needless to say, the 25th Anniversary event was inspiring, and it's my understanding that they're doing this on a sort of tour. So if you get to go to this event, DO NOT MISS IT. In fact, I recommend going to any event like this that you can find if you're an aspiring screenwriter, director, or even actor. I'm seeing things from the production side of the street because that's what I'm into, but if you love film at all, these things have a tendency to hit you right where you live in the best way possible. So viva la cinema, and long live the happy 80's classic, Back to the Future.