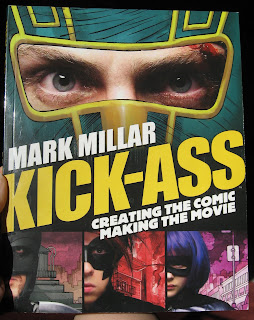 A source over at Titan Books sent me an advance copy of a behind-the-scenes book that features lots of great information about the making of the movie adaptation of Mark Millar's extremely popular Kick Ass.

This is a movie about what would happen if real people decided to become superheroes, even without special powers. I want to clarify right off the bat that I'm reviewing this book and not the movie or the comic.

Why would I want to be clear on that? Because if you've read the comic, you know that it's got some pretty serious R-rated material in it that I think is going to spark at least a little controversy. But I want to steer clear of that here and just talk about the book in an un-biased way.

If you're the kind of person who loves the special features that come on your DVDs and Blu-Rays, you're going to love this book. It's full of fun behind-the-scenes stories from everyone at the center of the production. If you were into the comic or even Mark Millar's other work, this book will be an extra special treat for you.

Let's dive into the details. (Which are going to diverge into a conversation about violence in comics and film.) 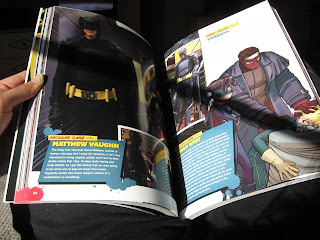 In the book, you'll find:

If you're a fangirl, you'll enjoy page after page of firsthand information from the people closest to the comic and film, including Millar himself. As a matter of fact, you can read ready-made rebuttals for some of the criticism Millar knows he'll face for this film.

Comic are like any other art form, there's material for all age ranges and maturity levels. But they're not really separated in stores. Sometimes you'll see the parental advisory warnings, like the one on the back of this book. That's rare though.

Although, just to be honest, in all my years of comic browsing, I have never, not one single time, been in the store at the same time as a kid. Interesting, huh? Comics today seem to be primarily for adults and the only kids I've ever met who are into them are the children of comic book enthusiasts. Kids don't often just stumble upon a love for comics the way they used to...and now I'm sounding old.

Anyway, back to the point, nobody protests graphic violence in comics. Personally, I find violence on the page of a comic far more palatable. It's almost always more thought out and intellectually delivered within graphic novels than it is in film. Because the artists drawing the panels are considering factors like composition and balance, which is sometimes ignored on film in favor of sensationalism or exploitation.

But hey, there's good and bad in all art forms right? And that's just like, my opinion, man.

This film will be controversial. Kick Ass has a kid in a lead role (doling out vigilante justice) doing some majorly adult stuff. You will hear protests over this movie from someone. I save my judgments and opinions, no matter the buzz, until after I've seen the actual movie.

One of the most interesting parts of the book is hearing how the creators prepared themselves for that and what their thought process was during the initial creation of the material. It's really interesting stuff, and nice to have it all in one place written down.

Special features usually move way too quickly for me.  Press junket interviews on entertainment clip shows can be infuriating. They'll tease an interview with a writer or director you're really looking forward to seeing for 25 minutes. Then they'll give you a 30-second snippet of something not all that interesting. So this book gives you a nice, long drawn out experience.

Final verdict? If you already own the comic, you'll probably want this book.