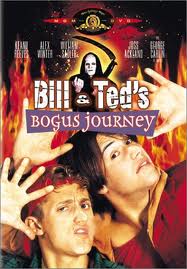 A few nights ago, I asked my husband if we could rent Bill and Ted's Bogus Journey. To which, of course, he said yes. Not that I need to ask permission. I just wanted to know if he'd watch with me.

I've also been walking around humming, "God Gave Rock and Roll To You" all week.

I loved the Bill and Ted movies when I was a kid. I love them now. But I must confess, the ending of Bogus Journey struck a chord with my young, Star Trek influenced, utopian-dreaming heart.

A world of peace and harmony brought on by rock and roll? I liked it. Plus, even back then I knew they filmed in some locations where Star Trek: TOS was filmed.

I always obsessed over movies where the losers became the heroes. Imagine that. Plus... I kind of thought the Reaper was cute. I KNOW! I know.

Maybe it was an early jones for the artsy films of Ingmar Bergman? A sick fascination with the concept of my own mortality, perhaps? A pre-Conan O'Brien love of pale-skinned Scandinavian men?

Maybe it's a question best left unanswered. The point is, I think about this movie too often for a grown-up.


So you can bet I got pretty excited when I stumbled upon the news today that there will be ANOTHER Bill and Ted sequel. Or so they say. I have my doubts. And fears. But I choose cautious optimism for the time being.

Check the article on DEATH AND TAXES here.

So let's prepare. Let's revisit the joy that was the idealistic early nineties and remember where we left our daring heroes...


Where do you think Bill and Ted will go next?


Oh, and good luck getting the KISS song out of your head. *maniacal laughter*
Email ThisBlogThis!Share to TwitterShare to FacebookShare to Pinterest
Labels: Movies
Newer Post Older Post Home