Goodbye Jane Russell: It Gets Sappy...You've Been Warned 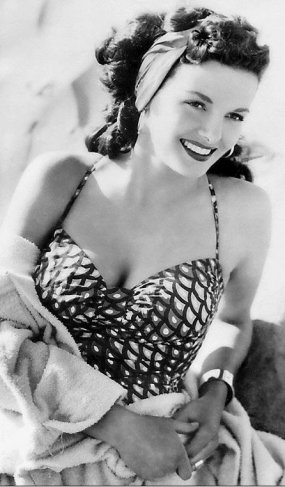 I've written briefly about Jane Russell before. The short version of this blog is that I loved her and I'm sad she's gone. But there's so much more to my life with Jane, we have a long history. Even though she never knew it.

I've always identified so much with the old-timey dames of the silver screen. In grade school, I tried to connect with people via old movies slang. I'd use their jargon and affect their accents and my fellow kids would look at me like I was nuts. "Eee gads," I might start, "however did you manage to get your hair in those ringlets?"

That's what came out once when I tried to talk to one of the popular girls about hair. I thought I was being clever. Funny. Talking like the showgirls in Cover Girl. She stared blankly at me with wide eyes and backed away.

Hard as it was for me to believe, not everyone came from families where film history was an important part of growing up. Being born for geekdom, I didn't have much a chance at making a connection with the average bear. 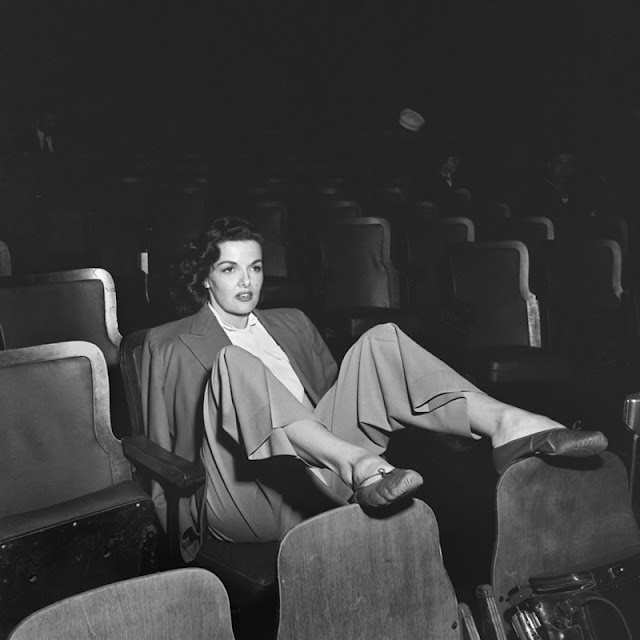 With the benefit of hindsight, I think I understand why that movie was my favorite. It had everything I loved. There was travel, adventure, and comedy. Second of all, my oldest sister Shannon introduced me to the movie. She was the first real movie geek in my life, and still, she was the most serious and dedicated film lover I've ever known. She skipped long nights and weekends out in her teen years and early adulthood to stay home and watch movie after movie. We rented them from the library for free. Classic after classic. She had an endless hunger for film. An endless appreciation.

More than any of that though, the movie had Jane Russell. She was a revelation to me. Most of the classic movies I watched had delicate flowers of leading ladies. Fragile women that needed care and protection. I loved Marilyn Monroe. I still do, but even as a kid there was something about her comically needy onscreen presence that occasionally irked me, caused my attention to drift in the middle of The Seven Year Itch.

I know. It's sacrilege to say that, but it's how I really felt. Growing up with The Addams Family revival and Scully on TV every week gave me a sort of predilection for tough-talking leading ladies. I know Monroe was different off-screen. I know she was doing was an actpitch-perfectfect mirror of the sometimes sad reality about what men wanted back then. A helpless little nymphette. By spoofing the very idea, Marilyn was projecting a different kind of strength and intelligence.

But then, in Gentlemen Prefer Blondes, there was Jane. After an entire childhood packed with Monroe, when my sister introduced me to Russell, I was thrilled. I was captivated. Hooked, literally, on that movie. I loved it like a friend, ridiculous as it is to say and watching it became a part of my routine.

Once in the early nineties, when arriving home from a long Griswold-style family road trip to the Grand Canyon at 4:00 a.m., my parents went straight to bed. I was exhausted. But I dutifully popped in my Gentlemen Prefer Blondes VHS and watched the early morning light of the Indiana sunrise fill the living room.

I was only able to drift off to sleep after the end credits had rolled. I missed my friend Jane. It was nice to see her again. 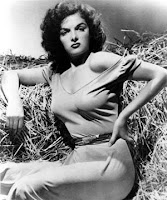 Russell was presciently modern. She was witty and sarcastic. She was proto-Tina Fey. She was funny and strong and self-aware. She had a loud strong voice and her character spoke with a frank honesty that would've been considered unladylike back then.

After her scandalous "too sexy" debut in the western The Outlaw, I figure Russell had nothing to lose. In keeping with her frontier-themed start, I think she decided to adopt a Mae West-y personae.

Sidebar: I think Sigourney Weaver's debut of strength allowed her a similar luxury. She can play anything now, sexy, silly, helpless, mean...and she's safe because she played Ripley with such strength that everyone knows she has depth and range.

More than anything else though, Russell was talented. She could sing. She could dance. She could be funny or dramatic. She literally had it all.

Jane Russell was someone I wanted to be like. She had a strange amalgamation of what we now know as action heroine strength combined with all the class, romance, and femininity of the golden age of Hollywood.

Get ready for a left turn.

My oldest sister Shannon, the movie geek, died tragically in a car accident my freshman year of high school. She was in her mid-twenties. Afterward, I slipped into a kind of emotional coma. And guess who had a hand in pulling me out of it? Russell.

When I was swimming in a sea of mysterious grief, I could pop in the VHS tape that had Gentlemen Prefer Blondes on it. When I was floating around in my living room during one of those long sleepless nights after my sister's death, feeling like I was the only person on planet Earth, I could run my finger over the label handwritten by Shannon. There it was on the white label, written in her feminine bubble letters, in faded blue marker.

I could watch the movie she introduced me to, I could remember the parts she laughed at, and it was my way of reaching my hand through the veil and trying to touch her life again. There comes a moment for everyone after they lose someone they love, a moment when they have to either give up completely or turn around and try to get back to being alive again. I can't tell you my exact moment, but it definitely took place during one of my insomniac movie binges. When what was on the screen was too good, too funny, and too full of energy for me to want to leave the party. 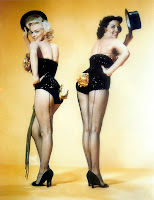 It's not that I worshiped Jane Russell. It's that she had qualities I could admire and emulate. She was different from almost all the other Hollywood actresses of her day. She was decidedly more brusque. Imagine having the confidence to star alongside Monroe and not look like you give a fig about being so much larger in stature than your costar.

I was different too. Of course, I was different because I didn't understand basic human social rituals or how to match my clothes. But still. Different is different and watching her made me feel better.

And this may sound goofy, but it even came down to little things. Vain things. For example, she made me proud to be a brunette. A "raven-haired beauty," her costar called her.

And really, it's that Russell was like my sister. A spitfire. When you're a kid, you wander around like a little sponge, soaking up everything you see and hear. I think soaking up all of that old-movie sassy dame sensibility combined with my sister's willingness to be her own individual changed the wiring in my growing brain somehow. The more films I watched, the more possibilities I knew there were in life, the more I could handle growing up weird.

With Russell passing away, it's almost like I'm back to the April where my sister died. Back at the beginning of that long summer of watching movies all night, every night. But I know I'm not. It's just one of those fleeting moments. Jane is gone. Shannon is gone. It's like getting a shot, a brief wince of pain for a day or so and I'll be back in my present reality. Back to my life, not as a grief-stricken young teenager in my hometown but as an almost thirty-year-old writer. I'm here now and people need to know about Jane (and Shannon) and plenty else in this world...so I write. I ramble on and on about great movies and fun memories and that's just how I roll.

It's so odd. The Earth stops spinning briefly because a movie star slipped away somewhere on the other side of the country...just a second or two. Just a day. Just a brief reminder of the last time the Earth stopped. How silly. What an unpredictable thing a brain is...that a love affair with classic film could bring up these brief stings.

There's an upside to this down day though. There's someone I can call to talk about this moment in time, if I need to. My best friend Lindsay. Lindsay, who I met in junior high, is a movie geek just like me. A partial insomniac, just like me. Someone who not only watched Jane Russell movies with me, but someone who stayed up on those late nights to try to learn Russell's dance moves and sing her songs. So I did find someone who understood my old movie geek speak after all.


Jane, even though you're gone...ridiculous as I feel talking to you in my nothing little blog, I just wish I could tell you that you will literally never be forgotten. Not just because some people out there think you're funny or pretty, but because you made a difference in my life. 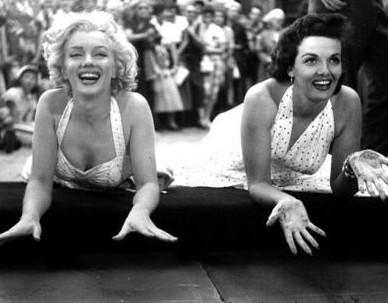