1. For an extensive list of movies out this weekend, check out the weekly movie releases over at Five Sprockets. I may have been a little sassy in this week's round-up, so if you disagree for any reason, please feel free to comment! I love a good debate, especially about film. The thing that makes our listing of releases unique is the fact that we aren't afraid to share out opinion and we also list all of the films out that weekend. Not just the big budget blockbusters. We care about letting people know about indie films and lesser known movies too, even short films.

2. SXSW has been happening all week. If you don't know, that South by Southwest, a premier film and music festival that happens in the warm and weird city of Austin, Texas. Home of Ain't It Cool News, Wes Anderson, Luke and Owen Wilson, and Stevie Ray Vaughn. I love Austin and would love to cover this festival sometime in the next few years. But you know who does a great job covering the festival every year? Roger Ebert himself, who is a blast to follow on Facebook. Check out some of his coverage HERE. 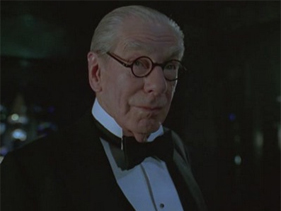 3. Last but not least, I'm very sad to report that the film world lost an incredible actor this week. Michael Gough, known and beloved for his role as Alfred Pennyworth in four Batman films, passed away at the age of 94. Though he was well known for Batman, he worked in many films. He had a long career (reaching all the way back to 1946) as a character actor, worked frequently with Tim Burton, and any director lucky enough to snag him added an instant air of credibility to their film via Gough's dignified and always believable performances. He was one of those actors that had the indefinable "it" quality you always hear talked about so much in the film business, and he will definitely be missed.