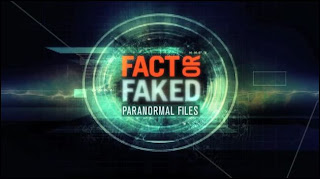 UPDATE: SyFy.com linked to my article on their FB page. When commenters began to point out my criticisms, they took it down. It was a brief brush with going viral, but it was a fun one!

Beware the shark, you are awfully close to jumping it. And far too soon.

Fact or Faked: Paranormal Files is a SyFy Channel original show that offers viewers a refreshing premise. Instead of so many other paranormal shows, this one aims to immediately debunk popular internet videos of ghostly encounters, mysteries or UFOs. (Think Scooby Doo meets the Ghostbusters) As a natural skeptic, I rather enjoy the flip. More on that later.

Instead of jumping in head first like any of those ubiquitous ghost hunting shows, running off to investigate with enough night vision cameras to make Jurassic Park jealous, (Look at me and my twenty year old jokes! Hi-Oh!) this group of experts instead attempts to recreate videos to get closer to the actual truth behind their origins. Hooray for reverse-engineering and countering mass online hysteria!

The first season was a blast. I latched on to it quickly, mostly because I think I'm SyFy's ideal demographic. A skeptic with a heart of gold. Raised on Godzilla, Indiana Jones, Star Trek, Spielberg movies, and Ghostbusters, I tend to gravitate toward sci-fi and fantasy. I don't believe in ghosts or aliens, but I love the movies that make them famous pop culture fascinations. (I also watch Destination Truth, Face Off and Brad Meltzer's Decoded for similar reasons. I'm an adventure genre junkie.)

Like other shows that catch on quickly, it seems that Fact or Faked has changed some of what made it so initially engaging. This current season seems more rehearsed. Right off the bat, I want to be clear, I don't blame the cast for this. There's something wonky about the production.

Here are five potential misfires that could bring the show down before it ever really gets off the ground... 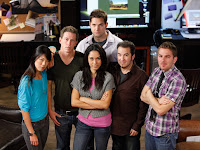 1. There's forced tension. The cuts to commercial breaks are meant to seem suspenseful, but instead feel silly. This has also happened to Destination Truth, the trouble is that the potentially suspenseful transitions have become so predictable. ("What's that?!" INTENSE MUSICAL CUE/RANDOM KNIFE SHARPENING SOUND - CUT TO COMMERCIAL - RETURN FROM COMMERCIAL "Oh, I just fell down and scraped my knee, it's nothing.")

2. There's less transparency. I caught a little in-joke in The Queen Mary episode that raised an eyebrow. (This is my nit-picking...big time. But bear with me.) When touring some reportedly haunted sections of the famous ship permanently docked at Long Beach Harbor, the group's tour guide said there are reports of a ghostly little girl giggling every day in the area where the team would be investigating. What they failed to mention, and I know because I was in the exact same areas where the team was less than a month ago, was that they were investigating a mocked-up tour area called "The Ghosts and Legends of the Queen Mary".

This is a guided tour area where lights, simple animatronics, minor haunted house illusions, and you guessed it...audio of a little girl giggling are featured. I've worked a bit in film and television so I can tell you that every show has to be produced to give it some drama and fun, to make sure its interesting.

But completely leaving out the fact that they were in the tour area, that there was a tour at all, and that little joke...it made me trust the show a lot less. Here was this ideal show, some SyFy for skeptics, and it bummed me out to think that it was this produced. I know that's silly of me, it's all for entertainment after all. It's not like they are a serious team of researchers trying to get to the bottom of anything. But for a minute there, I thought they were. And that was different and cool and encouraging.

3. I can't take any more countdowns. Please...stop counting down. There are countdowns to cameras turning on, balloons being released, flares turning on, and even an empty swing being pushed, for crying out loud.

The counting down made sense in the first season. There were walky-talky timed stunts where cast members had to communicate across vast distances to try to recreate these viral videos with precision timing. And again...not the fault of the cast who must conduct these experiments. But oh the countdowns...so very silly. And repetitive. Cut half of them from the show and spare us all.

4. The aliens are invading. The first season had some truly unique videos being investigated, some that gave me goosebumps. (The odd stilt-walking cryptid captured on a security cam was a blast.) But now, almost every new episode is all about aliens and UFOs.

I know this is probably to avoid cannibalizing the monster/adventure feel of Destination Truth. But still, I miss the more odd and truly quirky videos they attempted to debunk. Also, it's pretty easy to fake the UFO videos I think. That goes double for poltergeist footage.

5. It's getting too serious. This happened with Brad Meltzer's Decoded mid-season too, but they managed to right the ship just in the knick of time. Fact or Faked has started to take itself far too seriously and that's sabotaging the fun tone of the original premise.

One of the qualities that brings me back to Destination Truth again and again is the fun. They don't take themselves too seriously which prevents me from rolling my eyes when I know they're on an impossible quest. With Destination Truth, they've only ever found genuine evidence once. (With the Yeti...and it was DNA evidence. And it wasn't definitive, but still. It was something.) Yet I keep watching, even when they never find a monster.

As a viewer, it helps to know that we can share a little wink with Josh Gates (the host), who also knows that the very idea of running out and catching monsters is innately silly.

We watch it for the adventure aspect and the laughs. Fact or Faked is going to have to figure out what "it" is that will really keep viewers coming back. Will it be team chemistry/favorite cast members? Will it be humor? Will it be something else like real results? It's worth noting, the Fact or Faked team has successfully recreated several viral videos/urban myths so far.

Despite my criticisms, I'm a fan and I'll keep watching. But the show seems to be slip-sliding into the TV version of tabloids from the eighties. (Bigfoot meets Martian!) When instead, the show could be excellent documentary television of a higher quality with a much less soap-opera/pandering feel.

SyFy, trust your viewers. We want a wide range of shows. Sure, we love our Giant Sharks and Mega Octopi as much as the next guy. But what if you let one, just one of your shows skew more toward the Independent Lens crowd? Fact or Faked could be just the show for a serious run at this subject matter. Even better, you have a perfect cast in place to give it a shot.