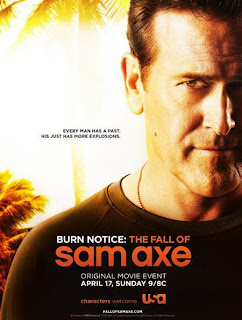 This is a biased review. I think it's fair you know that now. I'm a total Bruce Campbell fangirl. Naturally, this informs my opinion of the Burn Notice movie that premiered on USA recently.

I was running around EPCOT when it aired, otherwise I would've been glued to the TV like every other Campbell/Burn Notice follower out there.

For a summary review, click READ MORE and scroll down to "Get to the Point". For the whole rambling mess, continue on. (That's you Deadites.)

When I finally watched Burn Notice: The Fall of Sam Axe today as a re-run (at 10:00 a.m. no less) I was pleasantly surprised. Jeffrey Donovan, the actor who plays Michael Weston, directed this prequel. It gives us the back story of everybody's favorite margarita-guzzling retired Navy Seal, Sam Axe. 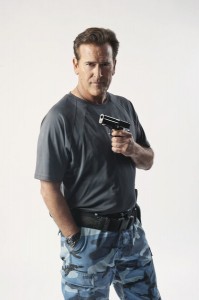 Here's the thing about Bruce Campbell...he's funny. Really funny. And he's a cult icon. For those of us that read his books or grew up watching him in the Evil Dead franchise, we know this fact well.

Cult icons, as William Shatner or Liza Minnelli may tell you, usually end up relegated to playing themselves in cameos. It's what happens when an actor or an entertainer delivers a character or performance so unique that fans become obsessed with that one part of their repertoire and they want to see it again and again. As you can imagine, this gets them potentially type-cast for life. Not exactly the worst fate a performer can befall, but also probably not the most fun to play.

So often, Campbell gets put into movies for just a moment or two. A moment that slows way down, where the director essentially points and goes, "Hey look! It's Bruce Campbell. You love Bruce Campbell!"

And I do indeed love Bruce Campbell. But I also just genuinely like the guy as an actor. I want to see him in more roles for longer durations of time.

I guess I know a little something about this because I grew up with a singing telegram performing mother. Everywhere she went, people expected her to be the life of the party. I'm sure that's one-tenth of what the rich and famous go through, but it's exhausting still to watch her get cornered like she's a dancing monkey.

And it must be really tempting for directors to ask Bruce Campbell to be the dancing monkey. While Donovan's direction definitely took advantage of Campbell's cult following in some moments (Campbell with a chainsaw! Campbell being called "the chin"! Campbell saying, "Groovy.") he didn't let that be the focus of the movie. There were just enough to be gratifying, but it also felt like we got that out of the way so we could relax and enjoy the story. Instead of feeling like a string of winks and nudges, the plot was cohesive and engaging the whole way through.

Sam Axe playing Robin Hood to some troubled Columbian villagers just worked. There were fist-pumping moments of awesomeness laced throughout with all the good stuff we love from the show...guns, helicopters, spy tricks and just a hint of romantic tension. The writing was note perfect and I wonder if that's because the creator Matt Nix is still involved. So often, shows change hands when they take off. Burn Notice has not only stayed on the rails, but has continued to grow and develop in complexity over each season, gaining a cult following of its own.

Not to mention any names *LOST, cough cough* but sometimes when a show is so amazing, the creators get wooed away to other projects and leave the show. With no clear end game, it's easy for TV shows to spiral out of control without their visionary at the helm. Remember the Brady Bunch episode of X-Files? It felt like a true death knell for the dignity of the show. A fun death knell sure, but a death knell nonetheless. There was no going back to that patented nerve-wrecking tension after seeing something as silly as Skinner being levitated in his office in front of four witnesses. But I digress. Big time.

The Fall of Sam Axe makes a natural addition to the Burn Notice canon. It serves the larger story arc of the show in a big way, and I not-so-secretly have my hopes up for a Fiona movie sometime in the future as well.

Get to the Point


Burn Notice: The Fall of Sam Axe felt like a big fat "thank you" to fans, a reward for watching the show consistently over the years. It's all the fun of the spy genre mixed with a distinctly Western-like feel. (Think Butch Cassidy and the Sundance Kid)

This prequel tells us exactly how Sam Axe ended up retired and living the good life in Miami. Bruce Campbell is the Bruce Campbell you know and love, with plenty of in-jokes for fans and his signature narration. But he also has the chance to remind us that's he's not just "the chin". He's also an actor who can carry a story. Here at last we have a balanced Bruce via Jeffrey Donovan's apt direction. And I don't know about you, but funny is a lot funnier when it's wrapped in a story that actually feels like it has high stakes and a genuinely threatening villain.

If only all TV was this much fun. Then again, Bruce Campbell can only work so many hours a day... 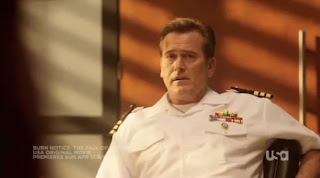 I'm sorry, I know it's the most obvious thing ever...but I can't resist.


P.S. What's a gal gotta do to get on the press kit list for this show? Anybody...anybody?
Email ThisBlogThis!Share to TwitterShare to FacebookShare to Pinterest
Labels: Bruce Campbell, Reviews, TV
Newer Post Older Post Home