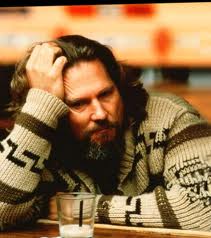 That title was just an Aladdin reference, I don't actually knit. Yes, I know it's weird to reference a nineties animated Disney film for no particular reason, but them's the breaks in my brain, okay? Okay.

Well, it so happens that this really amazing woman named Andrea does knit. It also just so happens that I discovered her via Facebook this week when I shared the fact that I had finally reached REM sleep after a long bout of sleeplessness and the way I knew it was that I was dreaming all night of searching for an authentic "The Dude" sweater for my husband. One can't dream, not even of Jeff Bridges movie memorabilia, without reaching REM sleep. So...hooray!

When I lamented that I had been searching for a Dude sweater for my husband for years, a friend posted a link to AndreaKnits.com showing that this crafty little minx had actually created a knitting pattern, from scratch, to the sweater from The Big Lebowski. I've seen a lot of Lebowski-esque sweaters, but never any perfect pattern replicas until now. Even in dreamland, this lack of authenticity really bothers me. (Sort of the way that they're always giving Batman laser guns and stuff...he doesn't use laser guns, so YOU shouldn't sell them toy people!)

You're probably really lost right now if you've never seen the movie, but just trust me when I tell you that this is the sweater of sweaters. It represents a higher plain of fulfillment reached by Jeff Bridge's character. It's just...perfect.

BEHOLD HER KNITTING PATTERN and marvel...MARVEL I SAY!

Of course, I can't knit. So it doesn't really help me. But it does impress me. I tried to knit once between the summer of sixth and seventh grade. I became fixated with this idea that by attaining a useful skill, I might win myself some form of social immunity. "Don't give me a swirly, I made you this scarf that's really really tiny on one end and super loose on the other!" My plan never worked. I learned too little too late that the barter system doesn't really help in junior high...but not until after I went through a major "I'll learn how to make hush puppies and donuts" month that July.