Mark Ordesky and Larry Longstreth talk "The Long, Slow Death of a Twenty Something" - Part One 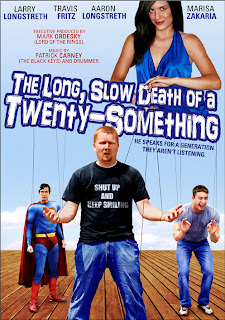 In Part One of my interview with filmmaker Larry Longstreth and producer Mark Ordesky, we talk about the making of "The Long, Slow Death of a Twenty Something."
Larry Longstreth has made a film that does more than entertain for a couple of hours. It strikes a nerve. The trailer for “The Long, Slow Death of a Twenty Something” has light saber dueling, a Superman cape, a Braveheart reference and a Wilhelm scream. Which means that to a geek like me, it feels like home. But it has something else too. A gut-punching moment where a father tells his twenty-something son, “I'll always love you, but I don't have any respect for you.”
This indie film hits us where we live, the generation that grew up on a steady diet of movie magic and Steven Spielberg that now has to face obstacles like student loan debt and complicated parenting choices. But you can only coast so far on the “follow your dreams” nostalgia of childhood before you start to realize that you have to actually do something to make them happen. But doing something is difficult and scary and opens you up to the increasingly cruel criticism of your peers and that anonymous monster called “the internet”. THAT is the nerve this movie hits. To me, the influence of a film can be gauged by what you discuss after watching it. And if my gushing so far is any indication, this one might have you feeling uncomfortably introspective...in a good way.

But let's rewind.
The story of how the film was made in the first place is an origin that could've been lifted off the pages of a screenplay. In 2008, Longstreth and his brother took a trip to L.A. to pass out DVDs of their work that Longstreth describes as “local access sketch comedy stuff”. The night before flying home and with only one remaining DVD the brothers decided to go out for a meal.
And then the restaurant they chose caught fire. No...seriously.
After being directed by a firefighter (Full service emergency personnel out on the west coast, huh?) to a small Chinese restaurant nearby, Longstreth says he overhead a familiar voice while dining. It was the voice of Mark Ordesky, known to film geeks everywhere for his prolific work as a producer and his prominence in the expansive special features on “The Lord of the Rings” DVD box sets. The interviews he gave in those special features brought him into the public eye in ways most producers don't typically experience.
Longstreth took a leap that night by introducing himself to Ordesky. He handed over his last DVD and the two formed a mentorship from there. Now Longstreth affectionately calls Ordesky his “cross country Yoda”, if that tells you anything about how well the two get along. Ordesky says he provides advice and guidance and, every once in a while, picks up the phone to help open a door or two. “I saw myself as a resource. It's a real classic producer/filmmaker partnership in that you're there to enable the filmmaking team to get up onscreen that which they are trying to get up onscreen and then to get the film seen by audiences.”
I know Ordesky's voice well too, having spent many nights devouring said special features with a greedy eye toward learning the filmmaking process. Doubtless Larry and I are not alone in this respect. In many ways, those special features served to demystify the creative process of filmmaking, showing the exhausting work that goes on behind-the-scenes of films like the “Lord of the Rings” trilogy. In the same way that these behind-the-scenes peeks serve to either spur aspiring creatives on toward filmmaking or turn them away with the truth that filmmaking is extremely hard work, Ordesky himself is just as honest and forthcoming on the phone.
I was able to chat with them both about “The Long Slow Death of a Twenty Something”. They overlap as they tell the story of how they met. You can tell they've done this a lot.
“It was a chinese restaurant that I would go to every Sunday to pick up take-out Chinese food. Sort of my ritual to get take-out Chinese food on Sunday,” Ordesky chimes in.
“The Hunan Cafe,” Longstreth says. 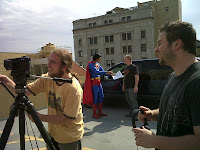 “The Hunan Cafe,” Ordesky echoes, laughing a little bit. The two start joking around and it makes me laugh obnoxiously loud for what should be a serious moment in my life as a writer. “There's a photo, that the night we met at The Hunan Cafe on Sunset Boulevard that I think Aaron (Larry's brother) got someone to snap it, but basically it's Larry and Aaron flanking me. It's like, hey, you know...let's all have a photo together. And literally, I'm pretty Hobbit-sized in that photo.”
“Yeah,” Larry says, “and we look like the two towers.”

Do we have to let go of our childhood inspirations to become real women, real men, real adults? (I sincerely hope not, or my Star Trek and Star Wars tattoos are going to give me some serious problems...)

My point is that if this is the question of my life, then chances are there are a whole heck of a lot more of us out there wondering the same thing...another reason why the film will resonate well. Seriously, this was supposed to be a straight-forward Q & A interview with these two super cool people, but look at the rambling it induced? I'm telling you, the trailer alone will get your wheels turning.
It's also no coincidence that I ended up talking about the film in this context, because I just sold my first screenplay (Don't get too excited, who knows if it will actually get produced?) and took over a local television show about theme parks as my post-grad career choice. So maybe I'm looking for a little justification amidst the blind panic of leaving academia.
But one thing that I learned from talking with Larry Longstreth and Mark Ordesky is that a lot of people are looking for some justification. A way to hang on to their dreams, but also a way to move forward with them.
Now I guess I'm the cornball. But I can't help it, and neither can Longstreth or Ordesky or Peter Jackson for that matter. And it's not really being a cornball. That's just what we're afraid people will think of us for trying to, for lack of a better phrase, go out in the world and make stuff.
Think back to a time pre-Lord of the Rings films. A world where the fantasy genre was in a deep freeze of under-appreciation. But by approaching fantastic material with sincerity and passion, Jackson reminded the world of the validity of an entire genre.
I wonder what Larry Longstreth will do by adopting the same attitude. I'm just saying right now, he's one to watch. Closely. (Via the internet, of course...don't be a creeper...) Every now and then, Google his newly formed production company "Eddy Spaghetti Productions" and see what's shaking.
If this were the end of a cheesy black and white horror movie, this is where someone would point at the screen and say, “What about YOU? What will you do?”
My vote would be to watch “The Long, Slow Death of a Twenty Something”, try to remember what you wanted to be when you grew up and don't be afraid to pick up a light saber every now and then.
You can pick up a copy of the film on October 4th at Best Buy.

You can pre-order it on Amazon. (Larry says don't worry, the price will drop.)