In Which Heather Confesses to Life as a Halloween Snob

I abso-freaking-lutely love Halloween! It's that one time of year you can completely geek out in public (outside of Comic-Con) and not receive negative attention. It's a day to look your obsessive fangirl best while laughing at the crappy costumes worn by those less impassioned. Granted, it's been a while since I watched Cinderella, but I'm reasonably certain she didn't wear a dress with her own picture appliquéd to her bodice. Creepy much?


It's reminiscent of the bad guy in the movie “Kuffs”, who wore a shirt displaying his own face. Incidentally, when he was shot and killed, the bullet went through the forehead of his visage. (Note: I do not condone violence to those who wear such things, but internal snickering is mandatory.) 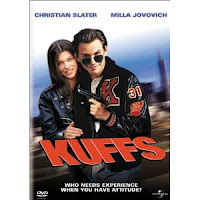 I fear I may be afflicted with Halloween snobbery. Or is that just my hypochondria speaking? Either way, it was bound to happen. Even as kids, my sisters and I had the best costumes. Mom did singing telegrams for a living, and her costumes were the absolute best!

Every Halloween, friends and neighbors did their darndest to convince her to loan out the contents of her costume closet. That's right. She had a closet just for costumes. How cool is that? It's like having a walk-in safe for your Star Wars collectibles! Or a pantry that stocks only the best chocolate!
As these costumes were her livelihood, she seldom gave in to the pleas of the costume challenged, but she gave freely of her ideas and make-up tips.
Now, having learned from her example, I can do the same for my kids, though admittedly with less grace. I delight in taking them trick-or-treating each year and comparing their costumes to others. Last year the comparison was easy. My son dressed as Mario (which I sewed, of course), and we soon discovered it was a popular choice that year. But of all the Marios and Luigis I saw, mine....er, I mean, my son's was the best. My daughter pulled off Princess Peach with nary a self-portrait or plastic mask. (I was proud of my parenting skills when I agreed to make her crown head-sized as she wanted instead of the tiny one I would have preferred for character accuracy.)
All right, I'll admit it....Halloween is a major ego boost for me. I don't just play a Halloween snob for TV. I am Queen Snob. But I love Halloween, and I love the challenge of making my kids look awesome for the occasion. Please understand: I'm mocking the inferior costumes I see, not the kids wearing them. Every kid is adorable in their costume. They're just not so fortunate to have the creative resources that others do. My demands for my own little geeklets are simple. When somebody lets you choose your own treat, go for the Reese's Cups. Always go for the Reese's Cups. Justice will be delivered swiftly for non-compliance. That is all.
(*smacking own forehead: “It's not about me!”)
~

Heather Cichos is an aspiring author specializing in the absurd. She is a firm believer in the Loch Ness monster and has vowed to one day cross-breed them with parakeets, thus producing a variety of colors that will make them more visible in the water. She lives in Indiana with her husband, geeklets, and cats. This location is not conducive to the search for Nessie, but most of the family is there, so what can you do?
Email ThisBlogThis!Share to TwitterShare to FacebookShare to Pinterest
Labels: Heather, Holidays, memoir, motherhood
Newer Post Older Post Home