So, you just know I love crossovers.

And this amazing bit of news popped up on facebook tonight and gave me something to look forward to. (Something to which I can look forward? Eh...I'm almost 30, I guess I can end my sentences with prepositions when I want to. Look I did it again!)

Just this week I was watching a random episode of Buffy while cleaning the kitchen and Buffy was talking to Giles, Riley and Xander saying, "You're like my fairy Godmother and Santa Claus and Q all wrapped up into one. Q from Bond, not Star Trek." It really got my wheels turning on crossovers that I would love to see happen in comic book form.

I mean, comics are unlimited. You can do whatever you want with them. It's what makes them the perfect format to use when you need to bridge time periods in fictional universes. (Countdown, anyone?)

If you could create a crossover, what would it be?

One of my big dreams was always to write a Next Gen/Sherlock Holmes crossover novel. (I have kind of a problem writing about Star Trek, in that I've never been able to stop doing it.) I always wanted more holodeck shenanigans with Dr. Moriarty. In fact, it's one of the reasons why I went to grad school. (There's even a really terrible copy of my first stab at it floating around the internet still! Mamas, don't let your babies grow up to self-publish.) Whether you had an agent or not, you used to be able to pitch your ideas and back in the day, (2008)  having an M.A. in creative writing was like having a free ticket to get your pitch heard.

You will never know the epic facepalm that happened when I saw that the publishing company no longer accepted unsolicited pitches by the time I earned my degree. Worst. Day. Ever. 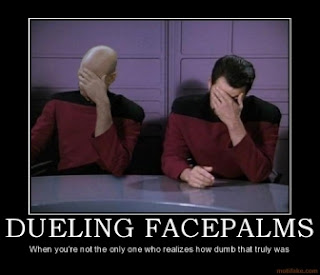 Come...let us facepalm together in remembrance of my terrible idea....
Email ThisBlogThis!Share to TwitterShare to FacebookShare to Pinterest
Labels: Star Trek
Newer Post Older Post Home