What Makes the Indiana Jones Special Features So Special? 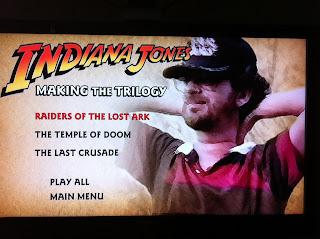 For example, I hate the features that just show clips of the movie spliced with interview footage and all the interview footage contains is an actor or director talking about the plot beat by beat. I know what happens dummies, I watched the movie...

So scratch "special features" that are really just junket footage.

Then there are special features that show us how green screen works. We got it.

I want depth. I want those blood, sweat and tears stories. Take "The Return of the King" behind-the-scenes for example. Nobody is spared and at times, the documentary-level details paint Peter Jackson in a far less than flattering light. They show the stress the crew is under as Jackson makes constant changes they can't keep up with, the lack of sleep that generates a cloud over all involved and the painstaking side of excruciating makeup and prosthetics processes that could easily lead anyone having to endure them to a nervous breakdown.

For my money, I guess I'd be legally required to say that the LOTR features are technically the best because of their length and unprecedented access to the deep, dark corners of filmmaking that most productions try to hide. I'm sorry to have to tell you this everyone, but the production business, even on the lowest of levels, is 80% unpleasantness. It's pain up until the moment of delivery, where all you can do is hope against hope that some glimmer of joy or intention shines through the months of hard work and awkwardness on set or clashes with the crew. And I do love the LOTR special features so so much. For Pete's sake (literally) I've wept over them.

BUT. They're my second favorite.

To me, the best special features of all time have to be the ones that come in the Indiana Jones Trilogy box set. (I don't own the quadrilogy as a box set, but I do have KOTCS separately. And that's an entirely separate blog.)

There's a reason why the Indy special features are my favorite and it has nothing to do with the fact that "the Indys" are probably my most-loved movies. It's that the features themselves echo the stories, the making-of shows a grueling, hands-on practical process that made these stories happen... 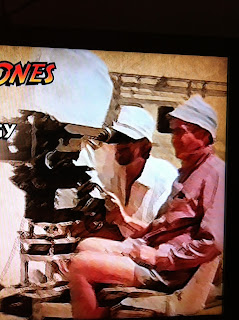 Indiana Jones as a character is rough and tumble. He's the pulp hero based on comic books and TV serials past who is always a few steps behind the bad guys. Think about it. Indy gets caught several times in every movie. It's not that he never fails. It's that he fails and then just keeps going anyway, even when it's a really stupid idea.

He's not James Bond. He doesn't have the best toys, doesn't get it right every time and we know he's afraid of at least one thing. A hero who has to run around the jungle and his one phobia just happens to be snakes? That's a bit of a foible right there, eh?

Indiana Jones was born of the eighties. That sacred decade which birthed a million movie geeks and by no coincidence, the one in which I was born. So when I watch "The Light and Magic of Indiana Jones" on the Bonus Features and I see that the Temple of Doom chase scene was filmed with a Nikon still camera and tin foil for cave walls...well...it's impossible not to feel the spark of inspiration ignite.

The budgets for all the Indiana Jones movies were relatively low. That meant matte paintings instead of giant sets, miniatures and improvised technology instead of literal interpretations of scenes. (Which I think tends to lend itself to more efficiency and creativity on sets.)

I mean really, it's a wonder to behold. Foil. Tin foil. As utterly convincing cave walls. And the camera your mom probably carried around her neck on vacations to Disney World provided the lens that captured such iconic chase scenes. I see facts like that and I think, I'm so spoiled as a creative professional. The tools we have access to today make us lazy. We have Final Cut Pro and After Effects and laptops that carry more power and potential than all of the cameras from the first Star Wars movie combined.

Just like Indy himself, the crew making the movies pulled them together while improvising and think of how many times they had to experiment with melting and exploding heads to get them right. What a day job...

All I know is that no matter how many times I watch the Indiana Jones Special Features, they still make me giddy every time. They make me want to go back. Back to the eighties. Back to low definition and practical effects and outlandish adventure plots. They make me want to scrape something together and make a short film again. They reconnect me to the spirit of why I love movies so much. I know my emotional warmth toward them is due in large part to the fact that they are so familiar. When you watch something so many times as a kid, it's impossible not to feel a happy heart-swelling to the familiar strains of John Williams recognizable score. I guess it also doesn't hurt that my generation was the first that had childhood access to repeat, in-home viewings of movies. So a lot of my fangirlness springs from a case of perfect timing.

But wait...that's just me trying to defend myself. And I don't want to downplay the awesomeness of Indy for any reason. There's still some mystery quality to it for me. I don't know why watching these special features specifically seem to kind of ping internally for me and why they do so every time I watch them.

The point is, this Saturday morning, I've put the Indy Special Features on for probably the hundredth time as if I'm studying them for an exam or trying to derive something from them. Watching them is like playing a video game. I know I've missed something. I haven't solved the Indy Special Features 100% yet. There's still something in there that will inspire me, calm me down during a season of overwork or just generally boost my mood a little bit. I guess some people would watch one of the movies to accomplish that goal. But for some strange reason, it has to be the special features for me. I don't know what it is that I'm looking for in there, but I keep going back to search.

What special features set your mind back to right again? Restore some joy? Is everyone like this with special features? Is it a modern geek thing or just a thing in my family? Should I feel ever-so-slightly pathetic for turning to special features the way others turn to alcohol or sugar? Should I be worried that I can watch something so many times and not grow tired of it?

I just know that right now I need to watch Steven Spielberg goof around with Kate Capshaw on set. I'm staging a full-on mental retreat for the next hour or so into the eighties, watching stunt men flip and hearing stories about cutting down TV antennas in Egypt and working with snake-wranglers and making mummies and you know...really important stuff...

This is not included in the Special Features, but it is a very cool CBS Interview from the eighties with the sound crew from Raiders. That's a fun afternoon on YouTube if you ever want to go down the rabbit hole looking at retro interviews and promo footage for Indy and Star Wars.