*A special welcome to new honorary raving fangirl, Aron Deppert! This is his first blog here. Check out his bio by clicking on the "Honorary Raving Fangirls" tab up top or visit his home base at AronDeppert.com.* 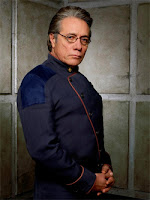 I grew up on a very strict television diet which mostly consisted of sketch comedy shows, occasional BBC sitcoms shown on PBS, lots of Star Trek: The Next Generation and its subsequent spin-offs. If you had asked me a few months ago who was the most admirable commanding officer of an intergalactic vessel, I would have said Captain Katherine Janeway of Star Trek: Voyager.

Don't get me wrong, Janeway is still at the tippy top of my list, but since recently binging on the entire rebooted Battlestar Galactica series I most definitely have to say she is closely tied with Galactica's commanding officer, Admiral Bill Adama. Here are a few of the qualities that make me feel like he is incredibly awesome.

Perseverance As Adama and his flock set out on their journey they had quite a few big roadblocks (spaceblocks maybe?) in their way. The first, and probably biggest one, was that no one was sure the planet they were seeking actually existed. As far as this ragtag group of humans was concerned, the place called “Earth” was just a myth that they had read about in their religious texts. Adama knew that despite this, they would need a proverbial carrot to motivate them so he bought into the Earth myth as a morale booster.

Also, while they were on this wild goose chase through space they had a fleet of religious fanatic, killer, human-hating robots hot on their tail. These robots, known as Cylons, not only outnumbered them, but out-gunned the humans. Adama not only thought of some ingenious ways to get the upper hand, but he never once relented in his quest to find a planet he didn't even initially believe in.

A booming, gruff voice It may sound as though Bill Adama gargled with a jug of hydrochloric acid before he started work each day, but that voice seriously works to his advantage. When he's barking orders in the CIC or interrogating a captive Cylon, Adama's voice is one that demands respect and attention. A growling reprimand delivered to an insubordinate officer is doubly effective if the commanding officer delivering it sounds like he is more bear than man.

Knows how to THROW DOWN! Adama may be old, but he is incredibly scrappy. He survived a nearly fatal gunshot wound to the abdomen, and successfully beat down someone half his age in a boxing ring. Anytime the going got tough, Bill's fists got going and didn't stop until he was the last humanoid lifeform standing.

That steely glare This is a man who basically invented glaring. One sideways glare from those icy blue eyes and you know you are in deep doo doo. With or without the glasses that is one look that most certainly would kill if looks could.


Fatherly love One of the higher ranking officers on Galactica is Bill Adama's son, Lee. Though their relationship is strained at first, the two quickly make up for lost time due to the tragedy they are facing together. However, Bill's love doesn't stop there. He repeatedly calls Starbuck his daughter, but it's clear that he cares for his whole crew a great deal. There are a few times in the series when Adama notes this type of connection with his subordinates as a weakness, but it would be easy to argue that this was one of his greatest strengths.

The sheer scope of what Admiral Adama had to accomplish would be enough to make my puny, spineless psyche crumble. Had I found myself in his shoes, I would have handed over my rank insignia and crawled into the nearest hole to drown my sorrows in Ambrosia. Adama ventured forth with the last remaining 50,000 members of humanity and set out on a path to find them a new home; a planet called “Earth” that most people believed to be a myth. The obstacles the universe threw in his path were too numerous to count, but with Bill Adama showed us all that with enough faith, perseverance, bloody knuckles, and love we can accomplish anything.
Email ThisBlogThis!Share to TwitterShare to FacebookShare to Pinterest
Labels: Aron, BSG, role models, TV
Newer Post Older Post Home