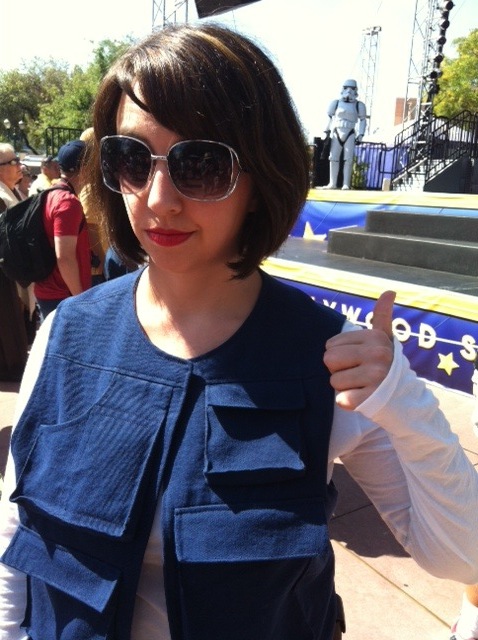 For years, YEARS, I have been dreaming of doing my first official cosplay. But let me tell you, cosplay ain't cheap. So it took me years to get started. I chose Han Solo, because like a lot of other things in my life, the idea came to me in a dream. One of the best dreams ever, in which I was Han Solo's daughter and I had inherited dear old Dad's blaster and holster. Anyway...

My sister Heather was really the person who brought it all together by sewing me the vest, as a gift! She's
amazing. I'll say it again, the woman is the Martha Stewart of geek crafting. She's such an incredible artist.

I wore my harness backwards. The whole day I spent in costume at Star Wars Weekends. This after I had spent the entire night before saving another near faux pas. I had purchased iron-on Corellian blood stripes in yellow a couple of years ago. Then I realized, Han didn't wear the yellow stripes until Empire, my outfit was from A New Hope. So I used THIS AMAZING TUTORIAL to fix the issue at the last minute. Viva The Stylish Geek!
This was the result. Not as neat and clean as I would've liked, but it worked. (For those of you who follow me on Twitter and Facebook, you've seen a couple of these already, but most of the pics here will be new. Apologies for being so slow in posting. There's been so much happening.) 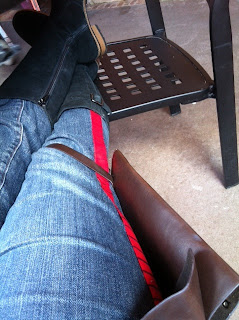 It's okay though, wonky stripes, backward harness and all, I wasn't going to miss my chance to step up to Boba Fett. Of note, I'm pretty sure I actually said, "Why I oughtaaaaa!" I'm embarrassing. One of these days though Boba, one of these days....straight to the moon. 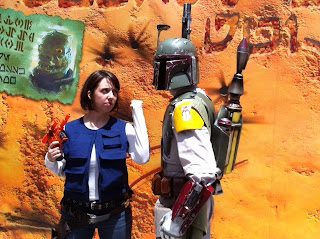 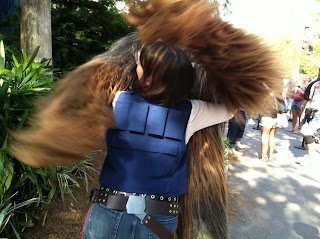 I call it the "Potentially Get Sued for Assault, Over-Eager, Mary Catherine Gallagher" hug. Luckily, Chewie just went with it. He made a lot of gestures about my costume. In fact, all day long, wherever Chewie was in the park, he pointed at me. So that was pretty freaking cool. 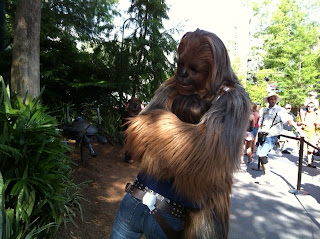 My co-pilot is good to me! 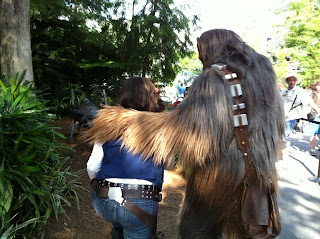 And then we boarded the Millenium Falcon together. But not before this happened... 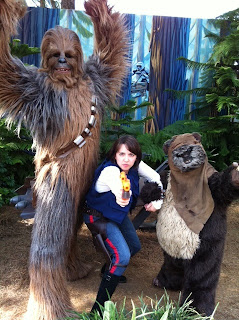 Please don't ask me why I'm doing that weird thing with my left hand. I won't have an answer for you. When the excitement takes over, it manifests in ways even I can't explain. Last but not least, I sure am married to a swell fella. I'm SO lucky he thinks the stuff I like is cool and not terminally lame. 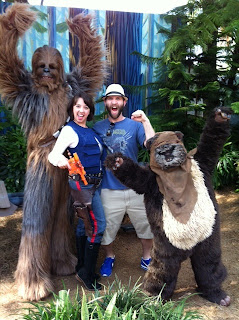 Of course, I took a million other photos of characters and Darth's Mall and some SWEET Her Universe merchandise that I really wanted to buy. We also attended Warwick Davis' one-man show. That was probably the highlight of Star Wars Weekends for me this year.

As an audience member, you got the feeling that this was maybe something Warwick was considering taking on the road. I HOPE he does. I would gladly see it again. It was so much more than a q & a. He shared some footage from behind-the-scenes of Willow and Star Wars that I had never seen before. He kicked the show off by coming out into the audience dressed as "the director" of the show and he was absolutely brilliant at interacting with the crowd and improvising. It was a thrill and an inspiration to be that close to a hero. I knew he was funny because of all his collaborations with Ricky Gervais, but he's even funnier than I realized.

You always wonder if actors you admire will be divas. But the fact that he came out into the audience to play was SO un-diva of him. He pulled volunteers to come up on stage and read dialogue as characters/people who were influential in his life. (Val Kilmer, George Lucas, Ron Howard, his mother, his grandmother, etc.)

It was almost set up as an old-timey radio show. The use of volunteers made the whole performance very off-the-cuff and Warwick enjoyed riffing with everyone. It was just...so good. So. Good. If you ever get the chance to see him live, don't miss it! It's a great time!

But as I mentioned in this post earlier, it's turned into quite a busy summer for me. Star Wars Weekends came and went more quickly than ever. I suffered a little withdrawal, but there's always next year!

One more note, because I'm really proud of something and I kind of want to show it off. Here are photos from my last two years at SWW side by side. I'm continuing to lose weight and get in shape and it feels great! Health is everything! I've worked really hard and I'm proud that each year we've attended SWW, I've felt better and better.

Next year? My goal is to fly my sisters down on my own dime and take them to their first ever Star Wars Weekends.

Did you go to SWW2013? Comment below and leave a link to your photos. I want to see what you were up to...  I'll leave you with a few more of mine: 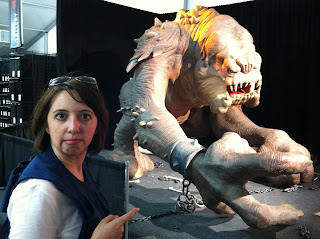 Call the ASPCA. They're keeping this rancor all chained up JUST for photo ops. 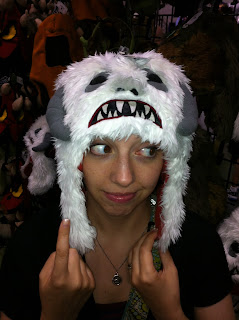 There's always a cruelty-free option. Like this faux Wampa-skin hat.