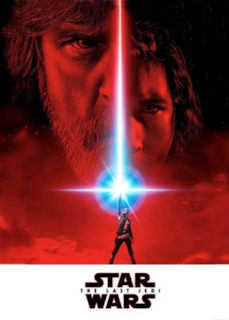 Your year in film doesn't have to end with Jedi!

Oddly enough, I haven't seen Star Wars: The Last Jedi yet. The force is indeed with me though, because I've managed to avoid even a single spoiler.

But what about those inevitable post-Star Wars blues that kick in once I have seen it? Am I the only one who gets those?

Sidebar: This time a couple years ago, I was knocking around Lucasfilm in San Francisco and seeing The Force Awakens at The Presidio. (Unfortunately, I was too busy to blog during one of the seasons of my life that made my inner geek the most happy. Maybe I should write about it someday?)

Anyway, between Christmas parties and finishing a couple small freelance assignments, I'm experiencing a lot of film anxiety. Why? I have three more must-sees and not a lot of time. As something of an obsessive compulsive, I really feel like I need to see them before the year ends and I officially declare my Movie of the Year 2017.


Here are my three remaining Must-See Movies of 2017:

1. The Shape of Water

This movie makes me feel like Stefon from SNL. To me, it has everything I could ever want: an old-timey setting, lauded character actors, Doug Jones as a gillman, Del Toro directing, and the Jewish Dracula Sidney Applebaum.

But still. I gleefully trip to the theater for all things Del Toro. As someone who shares his fascination with monsters, it's nice to go to the movies and see someone getting them right when 90% of the time, people miss the entire point. *cough cough* Tom Cruise's Mummy *hack cough*

For me, this is another ideal combination of talent and director. Method man Daniel Day Lewis is back with Paul Thomas Anderson. The preview makes the film look beautiful and taut. And I love a script that has something significant to say. This one seems to hint at themes of ownership and ego within the creative process.

I'm assuming there will be meta undertones as well, due to the fact that Daniel Day Lewis has announced his retirement. A movie about a master being undermined by his gifts, the same things that have allowed him to soar at his craft? Perfect.

Anyway, I wonder if he'll go back to cobbling? If you haven't heard the famous story, read this Rolling Stone article from 2003.

When the director was trying to crack his way into Tonya Harding's story, he visited several of the real people from the infamous Olympic scandal. When they gave conflicting accounts of exactly what happened, he didn't see that as an obstacle. He saw a structure.

If the previews are any indication, Margot Robbie's performance looks to be intense, comedic and joyous to watch.

Sidenote: I'm old enough to remember the Nancy/Tonya debacle unfolding in real time. How about you? I look forward the warm fuzzy nostalgia this will inevitably ignite for the early nineties. *cross fade into a montage of neon scrunchies and that's it*

FYI, all the smoking and glorious Allison Janney lines make me want to run to rewatch Drop Dead Gorgeous.

What's left on your movie list? Anything from months previous that you just never got around to seeing in theaters? Are you the same kind of weirdo as me, where you feel like you must finish your film watching homework before the ball drops?

P.S. The Nancy Kerrigan/Tonya Harding scandal is responsible for one of my all-time favorite Chris Farley sketches. Enjoy!

P.P.S. How much do you still love Tim Meadows? I'm thrilled he's appearing semi-regularly on The Goldbergs. He made one small line about a Pop Tart into one of the funniest moments of this week's episode. #underappreciatedcomedictalent
Email ThisBlogThis!Share to TwitterShare to FacebookShare to Pinterest
Labels: Movies, Star Wars
Newer Post Older Post Home