10 Sassy Dames of the Silver Screen and the Movie Musical 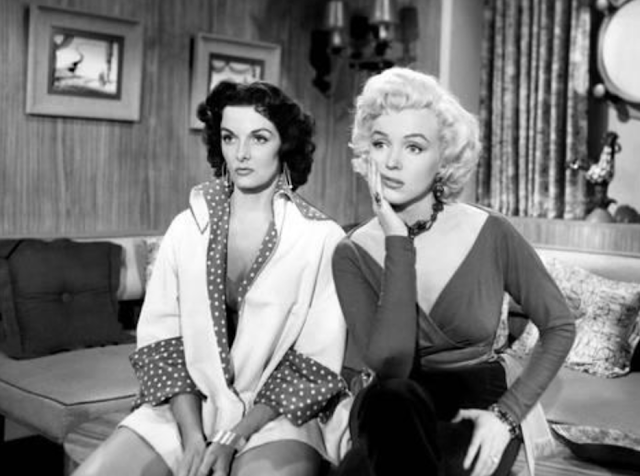 This was one of Turner's finest and most complex performances. In it, she doles out the sass to family, friends, bosses, and her boyfriend, played by Jimmy Stewart. Her complex character eventually ends up in some proverbial hot water.

This film is tough to find clips of, so I'll treat you to the trailer which shows plenty of evidence of Turner's fine performance. My favorite line? "You're not the guy to defrost me."


2. Ginger Rogers in Shall We Dance

Rogers usually played hard-to-get against Astaire's over-eager. But I think her funniest and sassiest performance was in, "Shall We Dance" where Rogers plays an exhausted starlet hardened by the world of showbiz.

This film contains themes of masking, female ambition, and living in a man's world. All of which Rogers handles expertly. As Astaire frequently noted, watch her do everything he does here "backwards and in heels", and this time...on roller skates.

3. Angela Lansbury in The Harvey Girls

Ever wanted to see Angela Lansbury fist-fight with Judy Garland? That happens in this movie. Once upon a time, before Lansbury was solving mysteries, serving tea, and ruling Broadway, she was a character actress who specialized in the stereotypical "bad girl". And she was a total dish.

Russell was consistently ahead of her time. Especially in this movie, where she not only managed to raise eyebrows in a now funny but once scandalous routine, but she also was able to parody her co-star, Marilyn Monroe in a bold impression that could've easily been considered an insult. Russell was fearless and as a result, unforgettable.


5. Betty Grable in Pin Up Girl

In this film, Grable plays a con-artist so good she fools her way into a musical theater career. Grable was typically in films centered around some kind of con. "The Merry Widow" is below and it's a good example of how most of her songs stood in sharp contrast to her sunny character.s This juxtaposition meant she could sing about rather dark material.


6. Katharine Hepburn in Bringing Up Baby

This is possibly Hepburn's sassiest role ever, just watch the trailer if you don't believe me.

7. Cyd Charisse in Singin' In The Rain

I doubt there's anyone on the planet that doesn't know about this famous dance. But here, Charisse has the chance to play the man-eater, a gangster's girlfriend in Gene Kelly's extended daydream. This is a legendary performance in the world of dance and it only takes seconds to understand why.

In this film, Hayworth plays a woman punished for her career ambitions, a repeating theme for her onscreen. You could read a lot into this seemingly innocent number which comes at a pivotal time in the film, in which Hayworth stands in for a mannequin to dance with Gene Kelly.

Her character is consistently forced to choose between what others want her to be for them and what she wants to be for herself. If you enjoy this, watch "Put the Blame on Mame" from Gilda next.

Monroe was often relegated to the role of vapid nymphette, but in this case, she portrayed a complicated woman who refused to play by society's rules. Her character can be timid about it, but she refuses to live as a woman "should've"at that time. Often Monroe was cast as a character with two faces, one seemingly passive to men, but one also aware of the persuasive power of her femininity. It was a constant through all her films.

You haven't seen a high kick until you've seen an Eleanor Powell high kick. (Why do I feel like I should be holding a cigar and talking like James Cagney when I say that?) At the 2:45 minute mark of the video below, Powell starts dancing...and I'd be more than willing to bet you've never seen anything like it!


Runners up for the list were Ann Miller, Martha Raye, Carmen Miranda, Audrey Hepburn, and...oh who am I kidding? There'll just have to be another list.
Email ThisBlogThis!Share to TwitterShare to FacebookShare to Pinterest
Labels: Classic Film, Funny Women, Lists, Movies
Newer Post Older Post Home