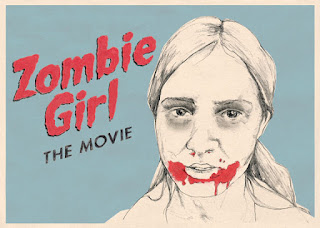 As the year draws to a close, I'm still cleaning out ye olde freelance closet. That means some
articles written for publication that hit the floor are getting a second life here on my blog.

This one was written in August and due for publication around Halloween...

It's an interview with the co-director of the endearing documentary Zombie Girl. I call it a must-see for any film geeks, fans of the zombie and documentary genres or aspiring filmmakers. Consider watching the trailer first (if you've never seen the documentary) before reading the interview.

You may have heard of the documentary Zombie Girl. It’s the Austin-based film about a 13 year old girl who set out to make a full-length feature film. A zombie movie she wrote called, Pathogen. It’s gaining notoriety in the public eye after winning a handful of awards and making a memorable appearance at Comic-Con this July. (The Zombie Girl screening was completely full.)

The plot may sound quirky, but Zombie Girl has more to offer than an interesting premise. Sure it’s fascinating that a teenage girl made a horror movie. But after the initial impression fades, you're drawn into the world of Emily and her parents. A sense of awe develops for their practical approach and sheer dedication to an almost impossible task.

Someone who knew nothing technical about filmmaking got the job done, despite the multiple roadblocks that filmmaking inevitably presents. Out of all the people in the world who want to make films, thirteen-year-old Emily Hagins did it. Thirteen. Was it innocence or bravery that lead her to undertake such a daunting task?

Aaron Marshall, one of the film’s three co-directors says, “Emily just dedicated herself to it, and she’ll be the first one to tell you that her film is not this perfect work of art or anything. She just realized that the only way to learn is to make mistakes and grow from it.”

The documentary began after he and his co-directors noticed a casting call posted in Austin that needed kids to play the flesh-eating undead, “That in and of itself was probably the most unique casting call we’d ever seen. We started by contacting her and her parents to find out more and see if we could maybe talk to them and a week later we were sitting there at her auditions.”

Following Emily, while she made Pathogen presented special challenges. Marshall said the main struggle was resisting the urge to help. “We would see her make a mistake sometimes and go, ‘Oh, she’s gonna regret that later.’ which she did and then learned from them. That was probably the most important thing was that we knew if we stepped in and just told her how to do something we’d be robbing her of the learning experience.”

Zombie Girl also showcases the fact that technology has made such a leap that kids everywhere have all the tools to make a feature film, quite literally at their fingertips. From sophisticated Mini HD cameras to the editing software that comes standard on many home computers, kids can now learn by doing in an industry that was once reserved only for those who went to film school.

Marshall says that was an intentional focus, "Zombie Girl is an example of what is going on out there with cameras nowadays. Emily’s story is extremely fascinating because she’s a girl and she chose to make a zombie movie and that itself is maybe a little rare. But kids making movies is not. There are lots of kids out there doing it and its really exciting. Zombie Girl is going to shed some light on the fact that kids today are getting started in making movies at a much younger age. I definitely want people to take that from the film.”

That shouldn’t take anything away from Emily’s accomplishment. Availability of technology doesn’t necessarily mean that anyone can (should or will) pick up a camera and become a filmmaker. It just means they can get started earlier if they're so inclined.

In fact, Marshall can vouch for Emily’s artistic progress since Pathogen. “She just finished last week (at the time we spoke in early August) her second film. It’s a mystery/ghost story. She shot it over last summer and has had to work (finishing the film) around her school schedule. Emily is pretty…level-headed, so I think she’ll just keep taking it all one step at a time. She’s still in high school, she’s still making movies, I don’t know where she’s gonna go, but I do know that her goal is to just keep making movies for as long as she can.”

The documentary is at times funny, but it’s not always easy to watch. Like any good documentary, there's plenty of real conflict. In this case, it's the stress of making a full-length feature and the toll it takes on Emily, her schoolwork, and her family. Making a film is a huge stressor on even the most experienced professionals. You can imagine what it might do to a thirteen-year-old and her parents.

The end result is a motivational tale for any aspiring artist. Marshall himself was affected by the process of making the documentary. Marshall says, “As a direct result of, Zombie Girl I did end up writing a horror script. Before it had never really been my genre, but getting deeper involved with Emily and in editing Zombie Girl, I was watching more zombie movies and it’s been a bit of an inspiration.”

The film takes a step away from the typically glamorous portrayals of filmmaking to prove anyone can get themselves behind the velvet ropes of a world that seems reserved for the elite. If they're willing to invest their time and efforts making the independent film they want to create, instead of banging on industry doors.

Outside of its motivational aspects, it also plays as a sort of parenting fable, where the nurturing effects of supportive parents can be directly linked to a child’s drive and ability to succeed in reaching their goals. The key relationship in Zombie Girl is the one between Emily and her Mother, who does everything on Pathogen from special effects to feeding extras to holding a home-made boom mic throughout much of the filming. While most parents are content to let their kids burn through the hours playing video games as long as they stay quiet, Emily's mother teaches her a valuable lesson about following through, especially when things become overwhelming.

Marshall talks about the two main ideas of Zombie Girl that took shape during filming and editing, “There are a couple of things that you can take from watching the film. One is, no matter what goals you have, just (taking) the idea of pursuing your passions and your interests and dedicating yourself to stuff and just being able to make things happen, you know, work hard at it. Also just the role of the parents in helping to nurture their children and helping them follow their dreams and how important that is to have that as well.”

Marshall says the main goal for Zombie Girl now is some kind of distribution deal. “We like the movie, we like the message, we want as many people to see it as possible, that’s kind of our goal, just get it in front of as many eyes as possible. We’re hoping for distribution to get it out there.”

With Emily having just finished her second movie, it’s almost certain that we’ll continue to see her making films well into the future. (I know I'll like be following her progress.) No doubt Emily’s story is just one of many young filmmakers coming up in an exciting time in the history of a relatively young medium. (After all, when compared to the fine arts, film is only about a century old.)

Zombie Girl is more than just an entertaining documentary about the making of a horror film. It’s a record of a new time in filmmaking, a “how to” manual for parents who want to know the best way to encourage their children, and a motivational tool for anyone who ever felt like they couldn’t do something because they didn’t know where to begin.

As with every good documentary, the target demographic is…everyone. Marshall explains, “It’s a movie that will very much appeal to genre lovers everywhere… all of us genre lovers can see a little bit of ourselves in Emily. But I think it can also appeal to any field of interest, it’s about a mother and daughter working together to accomplish a goal. I’m still excited about it here four years into it. It’s still a movie I enjoy watching and I still think it’s a good story.”

Once you watch this, you'll realize there really are no excuses for not doing whatever you want to do with your life. It's entertaining, it's funny, and I'm not gonna lie...perhaps I shed a tear or two watching Emily standing at her premiere in the famous film landmark, the Alamo Drafthouse.

This is a talented young lady who reminds us all that the only person really stopping you from accomplishing your goals, more often than not, is yourself.