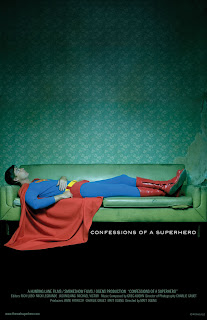 I did this interview with Christopher Dennis last May. It was slated for publication in Geek Monthly this summer, then again most recently for the Digital Subscriber's issue in November.

This was, hands down, my favorite interview. Dennis was a genuine joy. Sincerity is a quality sorely lacking in today's world. He and his colleagues have it in spades.

Speaking of which, the article will also catch you up on a few of the other superheroes from the documentary. Please enjoy. Heaven knows, the world needs a Superman.

If you’ve seen, Confessions of a Superhero you already know the name, Christopher Dennis. If you haven’t seen the quirky documentary about struggling actors in Los Angeles, perhaps you’ve heard of The Hollywood Superman. 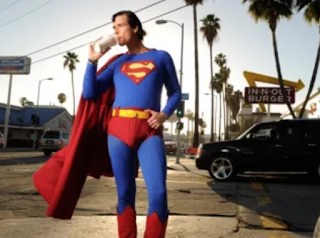 Such is the life of a cult classic figurehead. Dennis is something in the vein of a Clint Howard type. He’s not a reality star. He’s not desperately seeking fame. He just wants to work. At times, Confessions of a Superhero painted him in a less than flattering light, albeit a sympathetic one as documentaries are wont to do.

Of course, most people's lives would look forlorn if you played sad music behind footage of them brushing their teeth. The film portrayed him as equal parts wacky Christopher Guest character, eccentric collector of memorabilia, and stable father figure to a handful of Hollywood transplants.

What has life been like for Dennis since his appearance in Confessions of a Superhero? Sorry to disappoint, but he’s surprisingly stable and still crusading like his hero, Christopher Reeve. He's also eager to show the industry he’s more than an impersonator.

“Well, I wanna be a leading actor, more of a household name. When I die, I want to leave a legacy of work. Film and television seem to be what I am. I’d like to do a TV show. I would be willing to be any character. Christopher Reeve was very versatile with his roles and I’m very versatile as well.”

Like any smart actor in L.A., he’s open to just about anything. “I love sci-fi and horror. I’m dying to be in horror. I would love to play a killer, a kill-off, anything. Just as long as I get to do something. I’ll travel for work. I’ll do an independent film.”

If there’s one thing he wants the world to know, it’s that he’s ready for more work.

The documentary had a different effect on life in front of Grauman’s. Flocks of people realized they too could make money doing what Dennis does as a street performer. “It’s turned into a free for all out there. We’ve got characters chasing people down saying, ‘You owe me an f-n’ dollar.', and they’re actually using the full word. ‘I’m out here sweatin’ my f-n’ a off, the least you can do is give me a g-d dollar.’” 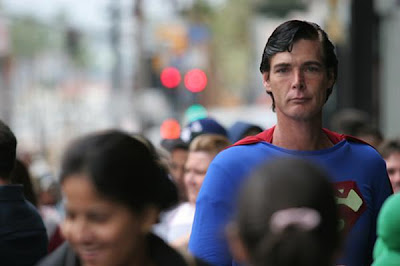 In order to prevent such chaos, Dennis attempted to create something sort of like a real-life Justice League. “We tried to form a union but that didn’t go too well. We tried to take it to the county and we held a meeting with the characters across the street at the Hamburger Hamlet. We had some people show up that were part of the chamber of commerce and they thought it was a great idea. We were going to make badges that would show they were certified and have a number and it would be a union. If we have to get a permit to be out there, then we would be working with the city and the characters are giving back.” But the ill-fated idea never got past the Hamburger Hamlet.

If you think it sounds like Dennis takes his role as a protector seriously, you’re right. On top of trying to start a union, he was also seen in the documentary attempting to stop a character from smoking while in costume. These kinds of mini-crusades are a regular occurrence for Dennis. It’s not just a job to him. “When I put on that suit, I think if someone were to ask me a question, I think, what would Christopher Reeve’s answer be? I want to keep it in that kind of a realm because Superman is an icon. Too many people look up to him.”

He also has a strange but true warning for tourists, one that sheds a little light on why the situation can get rough in front of Grauman’s. “We have a Charlie Chaplin that will run up to you and literally poke you in the chest and tell you that you owe him a dollar. I saw it the other day. I could call the cops because that’s assault. But guess what? The person he assaulted actually has to stick around (and) they’re usually tourists on a tour, where the bus only stops for 10 minutes. They have enough time to look at the Chinese Theater and the Kodak Theater and then go running back to the bus. Otherwise, they’re stranded.”

Despite the new influx of impersonators, the documentary seems to have done more good for him than harm. “I get (recognized as) Christopher Dennis more.” Another pleasant surprise for any fans of COAS is that the cast featured in the film are all still friends. Dennis says he regularly talks with Joe McQueen, who appeared as the formerly homeless Incredible Hulk. He even had breakfast with Jennifer Wenger, aka Wonder Woman, on the morning of our interview. 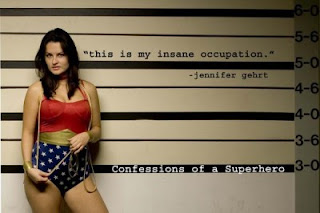 For Wenger, life hasn’t changed much for better or worse since the debut of the film. On the lack of personal impact, she says, “It’s just something that I did and some people enjoyed it and some people found it pointless. I am happy with it though. It was amazing to watch my life from a different perspective.”

As open as Wenger is about life post-doc, Maxwell Allen remains a bit of an enigma. Allen was the George Clooney look-alike and Batman impersonator featured in COAS that seemed to have some legitimate anger problems. He struggled openly with the stressful lifestyle of a freelance superhero. Dennis changed his tone a bit when I asked how Allen was doing.

I noticed the shift. I asked if he and Max had a falling out. Dennis responded without pausing. “We’ve had like four or five falling outs. We talk to him every now and then, but we don’t talk to him on a regular basis.” 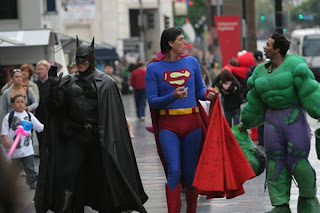 Aside from the rocky friendship with Allen, Dennis has one more complaint. The director of Confessions of a Superhero, Matthew Ogens, allegedly doesn’t have plans to follow up with the gang on film. The problem? In true Hollywood fashion, there are legal complications that bar the cast from appearing on any additional film or television. As themselves.

Don’t assume he can automatically buy his way out. “We would have to hire an attorney. Because we kept hearing that we could get out of our contracts, but nothing really seems to do the trick. So that’s what we’re hoping for, being busy to try to raise money for that battle.”

Even with the contract trouble, Dennis remains passionate about his role as the Hollywood Superman. He holds strong to the thought that America still needs superheroes in general, and Superman in specific. “America needed a colorful icon they could look up to. America is always gonna need that. It’s turned into a worldwide thing because Superman has been around since 1938 and he’s still going strong today. I like to say that everyone has a little bit of Superman in them. The thing is, we know what’s right in our hearts and what’s wrong. As long as you live by that…” Dennis trailed off there, fully content that I'd get his meaning. I did.

Aside from regular appearances in front of Grauman’s Chinese Theater, Christopher Dennis will be at Captain Celluloid’s Movie and TV World-Con II in New York City on September 19th and 20th. For more information, go to myspace.com/captaincelluloid5000