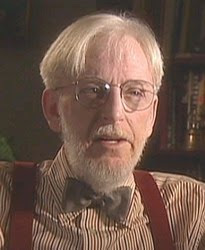 In all the hubub of the holiday, the sad news of Dan O'Bannon's passing was lost in the shuffle. Which is, in a way, characteristic of what happened to O'Bannon throughout his career. He was never a celebrity of the showbiz scene, and perhaps that's because he was truly one of "us". Just another geek. And I don't say that to marginalize him in any way. I say it with pride, to claim him as one of our own. He made it in the industry, able to channel all that passion and knowledge into a formidable career. And if he can make it, so can any of us. In fact, we may all want to consider striving to be more like Dan O'Bannon than Steven Spielberg or George Lucas.

I'm sorry to say I had never even heard of him until my Dad gifted me with the deluxe box set of Alien a few years ago. I'm a special features junkie, my whole family has always craved behind-the-scenes info, so when my Dad saw the box set, he passed it onto me quickly.

When Dan O'Bannon popped onscreen, I thought I had kind of died and gone to geek heaven. He was so blissfully uncool, relating his harrowing tales of trying to make it in the film industry. Sleeping on friends' couches, living with frustration while his freshman efforts were scoffed at, and continuing on no matter what criticism or trouble he faced. Because what he loved more than anything in the world was to tell a story and get a reaction out of an audience. There was nothing arrogant about him, he shared credit, he had no shame when talking about weeping the first time he saw Alien on the big screen. He was so incredibly easy to love.

Only later did I find out that he was also responsible for another one of my kinder-traumas, the apocalyptic sci-fi horror film, Lifeforce. He also did the surprisingly well-done Invaders from Mars, which seems like it should be silly now simply because of the time and budget with which it was made. But it lives on like the kid's version of Invasion of the Body Snatchers. In fact, movies like The Faculty borrowed heavily from that film. I still get a kick out of watching it.
O'Bannon was charming and down-to-earth. He was the perfect example of why "geek" is a way of life. Geeks can never become cool, because they can't help themselves. They can become successful and respected and well-loved. But we will always be those child-like, some would say over-enthusiastic people. And when one of us breaks through the way Dan did, there's just no looking back. Dan was grateful for his success and gracious about it.

Watching O'Bannon talk with a gray head of hair was probably exactly like watching him in his younger days. (When he was quite the handsome fellow.) He never changed who he was and his trademark style was all over his amazing screenplays. He was a master of tension and suspense and he consistently payed homage to the comics and films that he loved as a child, never willing to separate his work from his inspirations and therefore never creating anything he needed to be ashamed of, whether something he worked on became a timeless hit or a cult classic.

He will be sorely missed and I'm truly sad I never had the chance to sit down and talk with him about any of his work or his life. 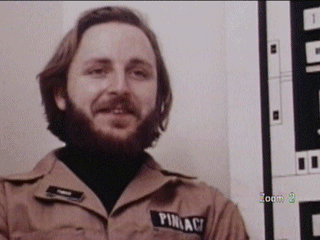