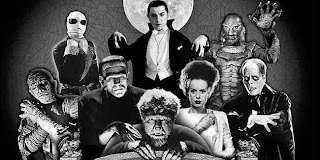 I remember hearing about this a few months back and getting so excited that I could hardly stand it. This is a short for AMC directed by Nicotero, a special effects artist and up until this point, a second unit director. But if there's any justice in the world, this will become a full feature! Jake and I have shot some purposefully retro looking stuff, and let me tell you, it's not easy at all. So watch this and...

Marvel at the great Lon Chaney Jr. impression!
Thrill to the original Gill Man costume!
Be amazed by the near perfect recreation of Boris Karloff's mummy!

If you're a monster geek, this is going to make your DAY.

Naturally, it's only fair to include one of the other great "inspired by" horror shorts. What makes short films like this so great, I think, is the effort to recreate not just the imagery of these great movies, but the dedication of the actors to recreate the style of the dialogue.


Well, you know I have to post this one in honor of Halloween and our beloved monsters coming back in style! (There's some strange embedding issue with Vimeo.com right now, so instead I'll just give you the link. Watch The Wolfman's Brother HERE. It's two minutes and twenty one seconds long. Just FYI.)

And what kind of a monster movie advocate would I be if I didn't include the Monster Squad preview. True, it's not a short, but it's one of the best modern makeup salutes to the Universal monsters ever created. (And if you watch it now, it's astoundingly violent...oh how I miss the eighties definition of a "kids's movie".) 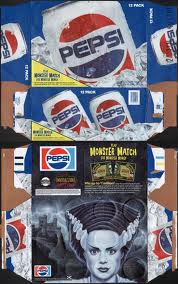 In fact, I'm starting to have major monster flashbacks. There was a major monster renaissance in the late eighties and early nineties if I'm remembering correctly, thanks to the run on Werewolf films at the box office? I even remember a series of Pepsi commercials featuring the whole undead gang...anyone else remember the great eighties Monster renaissance? (Gremlins, Silver Bullet, etc.)

I found some visual evidence that is starting to focus the fuzzy memories...a Monster Match game? Perhaps in the early nineties?