The Burn Notice Season Finale: Why You Should Watch This Show 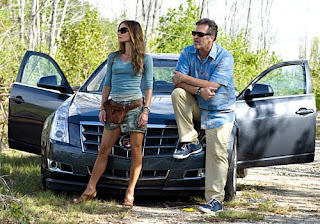 I thought I'd throw a link up to a blog where you can find clothing that appears in the show. Some of the items seem fairly out of date, so I don't know how "available" they will still be, nevertheless...

Here's the nifty little blog "Seen On". This link will take you right to the "Fiona" page.


Burn Notice is kind of the Miami Vice of today. Except waaaaay better than Miami Vice. It's fun to watch for a plethora of reasons and I think it will stand the test of time (as far as watch-ability is concerned) far better than the 80's cop show. It's just the fact that it's set in Miami that draws comparisons. Which is fair...but I'm sure it gets old for the show's creators.

If you're not watching the show, you should be. But I'd recommend that you start from the beginning or you may be a little bit lost. (Try Netflix.) I was immediately drawn in by the fact that the show has Bruce Campbell. A no fail casting choice, if you ask me. But we all know I'm a little crazy for Bruce...

But you also have a clever premise, Michael Weston is a spy forced out of service against his will after a mysterious betrayal and left to fend for himself, a prisoner in Miami. He's totally cut off. No money, no more contacts, and a lot of enemies hot on his tail now that he no longer has government protection. If it weren't for a friendly old girlfriend played by Gabrielle Anwar (who still carries a torch) and an ex-CIA buddy played by Bruce Campbell, he'd be out of luck. Oh yeah, and his sassy mother happens to live in town, played by the incomparable Sharon Gless. Visit the show's official page HERE. (Unlike some other show pages, this one has lots of good stuff. Photos, video, games, etc. They have a really funny "Ask a Spy" video series.)

The show is well acted, expertly directed, but most importantly, it's well-written. It does what most other shows refuse to do, it changes and morphs along the way keeping fans invested instead of creating self-perpetuating cliches that deflate the tension. More than anything else, it's just plain fun. Living in the frigid Mid-West, it's really handy to have a show about Miami to watch during the cold times of the year. I tend to drift toward tropical programming myself, so this show is right up my alley. (If you look on Wikipedia to see TV shows and movies set in Florida, there really aren't that many. Not nearly enough anyway, it's one of my favorite locations.)

Best of all, there's a strong female character who has a life of her own. I love her so much, I've already rambled on about her at bestactionheroines.com Anwar plays the character of Fiona with 100% authenticity and believability, and she can do just as much as the guys if not more. (She's an explosives expert.) In fact, if I could steal anyone's wardrobe and accessories, it would be hers. Aside from being ever-so-slightly lethal, her character is a fabulous dresser. (And I just LOVE her leather hip bag. Though I would want mine in pleather...no reason for an animal to die just so I can look cool. But that's another blog altogether.)

Anyway, watch the show, watch the internet content, and/or watch the two-hour season finale tonight on USA! May I entice you with a gag reel? (Warning, not safe for kids...)