When Movies and Comic Books Become A Reality - Space Travel, Mutants, and The Daily Prophet

You know how sometimes you think of something, and then you start noticing it everywhere? It's been that way for me with Richard Branson lately. Jake and I have talked about him a lot in the past, he's one of the world's billionaires that has joined with Bill Gates and others to lead the charge on giving some of that tremendous wealth back to society. I don't know much about him as a person, but he was the topic of some discussion at Starbase Indy, I saw him on the Today show last week, and then again being interviewed with Bill Gates and Ted Turner on MSNBC last weekend. But there are two projects he's working on and each of them makes a movie dream a reality. Legendary comic creator Stan Lee is also up to some interesting stuff...

1. Commercial Space Travel - This has been talked about for some time in the press, but the day is creeping closer and closer where you will be able to buy a ticket into space. Star Trek, Star Wars, and the idea of accessible space travel are going to make the leap from conceptual to actual in a matter of a few years. Branson's company, Virgin Galactic is finishing work on their re-usable space shuttles and even their very own space dock. In fact, they've even sold tickets. Know what the first shuttle is named? The Enterprise...got goosebumps yet? 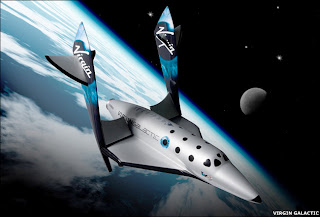 2. The Real Life Daily Prophet - Last week Branson released a magazine for the iPad called, "Project". Because it's a magazine for the iPad, the design of the magazine involves a lot of moving images, just like the newspaper in the Harry Potter universe, "The Daily Prophet". Check out the first cover as it will appear on iPad screens everywhere. (You can't go wrong with Jeff Bridges, that has to be a good omen for future success.)

3. Stan Lee's Superhumans - There's a show on the History Channel in which Stan Lee sponsors a documentary-like search for people with real-life superpowers. It's an interesting show that entertains, but also attempts to scientifically break down the abilities of people who dream things before they occur, people who can handle massive amounts of electricity that would kill any normal human, people that can hold their breath underwater for many minutes, and more. Watch video of some of the amazing people the show has found here.