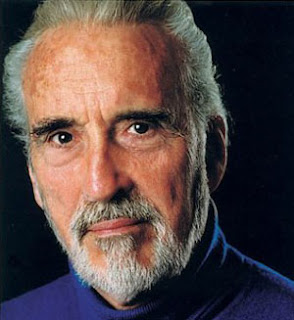 You are NINETY YEARS YOUNG today! When I was a kid, I used to sneak out of my room at night, grab a VHS off of one of our many shelves of movies (Specifically, a tape containing a collection of vampire movie trailers.) and be absolutely terrified by your portrayal of Dracula. Especially in "Dracula A.D. 1972" in which you killed a plethora of hippies.

That collection of trailers lead me to Hammer Films, which were so different than the Universal classics I had known up to that point. The Hammer Films in turn lead me to the idea that filmmaking was possible. Their homespun feel made making my own movies suddenly seem like something I might actually be able to do. (I hope you take that as a compliment and not an insult.) That lead to the cliche obsession with our own home video camera in which we made our own horror movies, that lead to college where I started making my own zombie movies. And all of THAT finally lead up to...well, I'm still working on that...

But the point is, you made an impact. A huge one. And if I feel that way, how many other thousands and thousands of adoring fans must feel the same way.

Little did I know that you would still be issuing power performances in so many of the movies that I love right here in 2012. And it isn't just your performances by the way, it's your behind-the-scenes footage. I'm pretty sure everyone on the set of "Lord of the Rings" was a little bit scared of you. In a good way. (See: Peter Jackson explaining how you told him you know the sound a man really makes when he's dying of a stab wound when he was directing you in your Two Towers death scene.)

The take away? May we all be so lucky as to begin doing what we love and keep at it the way you have. Happy Birthday good man! Thanks for all the thrills!