I held back on publishing this for days. Mostly because it's a topic I've written about repeatedly. I promise this is the last post I wax poetic about the action heroine's cinematic past.

As a writer, sometimes you have to ask yourself who you're trying to persuade. When I feel compelled to defend what I love, I think I'm writing to old bullies. Old boyfriends. It's time to move on to my own characters and scripts

But one last time for the people in the back. This is why Tomb Raider matters.

It was Sigourney Weaver in Aliens, back in 1986.

Sure, there were other strong women on film. But Sigourney was an action hero with a capital H. A Rocky. A Rambo. A Ripley.

Unlike the cultural minefield that was Ghostbusters, Tomb Raider fans are accustomed to Lara growing and changing. When Eidos created her, she was a he. And he was basically Indiana Jones.

Watch this special feature for some Eidos history: "Where's his whip? We're gonna get sued." 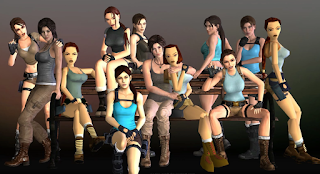 After he became a slightly boxy she, the character was gifted with impressive, ahem, assets. Eh, why play coy? Lara Croft had huge breasts. For the record, this never bothered me. But it's certainly worth mentioning. We'll talk about why later.

Over the years, Lara's development kept pace with technology. She even got a gritty, realistic reboot in 2013. 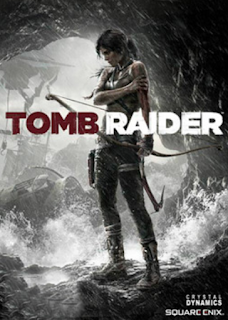 Sidenote: For me, that game was equal parts exhilarating and sickening.  When Lara died, it was violent and bloody. Bone-crunching. Cringe-inducing. I'm sure the impetus behind that decision was that if her death seemed hyper-realistic, we'd play our aspirational avatar more carefully. But I couldn't bear to see her struck down that way. End Sidenote.

Okay Audrey, but what about the movie? 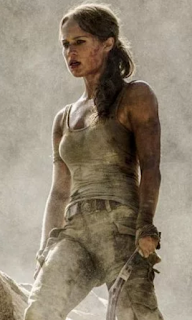 I liked it. I didn't love it as much as I did when I was eighteen and saw the first one. But that's just the ravages of time doing their thing. And you guys, they love. to do. their thing.

The new movie soars when it brings the game to life. Fortunately for us, that's often. It's chock-full of direct references, broken down to great effect here by IGN.

The first time I smiled was during the shipwreck scene. When Lara used a trademark game move to swing to safety, I silently cheered. I felt that same adrenal thrill anytime she ducked and dived for safety.

Just as I suspected in this naval-gazing foray into solipsism, my thumb repeatedly tried to press a phantom "x" button on reflex. Ah, muscle memory and the ways I could be using it to better myself instead of playing video games.

What kind of a world are we living in where Dominic West gets cast as the grizzly old father? I'll tell you what kind. Oldsville. But, as Lara said in the original 2001 movie, "tempis fugit".

Because it's a prequel, Lara lacks most of her trademark chutzpah. But that's the whole point. To watch her grow. To see her survive the events that will shape her preference for questing and her choice of workouts for years to come. (Note to self: Start working upper body strength.)

Not only does Lara feel more grounded due to the film being a prequel, she feels different because the world around her, and us, has changed. Drastically.

In 2001, we liked a lot of swash with our buckle. Pierce Brosnan was still Bond. We didn't mind a little levity. Huge...assets. (Boobs, remember?) Most people look back on the original Tomb Raider movies now like they're embarrassing.

Also worth noting, new Lara is competing with the entire cast of Black Panther, which has female warriors of many beautiful shapes and sizes. Brainy ladies. Tough dames from all age demographics. From the background players to the leads, characters wields various weapons. They slice and dice to the brilliant, blistering score.

It's a thing of beauty.

I haven't written about Black Panther because there are other voices more important than mine. But I've seen it twice. I'll definitely own it. It's just...what can I say about it that hasn't already been said? Here, or here, or here.

And anyway, here's the thing about Angelina Jolie as Lara Croft. Her portrayal seems downright goofy. Maybe that was the aim. The best hope for a character designed so specifically for the male gaze. She was so much woman she was almost camp. A second wave sweetheart.

But without her, we might not have our onscreen versions of Black Widow, Gal Gadot's Wonder Woman, or any of those aforementioned Wakanda warriors. One could posit, Lara wouldn't exist without Linda Carter. The point is, we have our present because of our past. Whether we consider our cultural artifacts to be critical/cultural failures or successes is almost beside the point.

Just as Ripley paved the way for Geena Davis in, well...everything, early Lara paved the way for New Lara. Scrappy, willowy Lara. She's no less strong. I'm here for petite Laras and curvy Laras. While we're at it, can I have some more Geena Davis and Sigourney Weaver and a thousand more Black Panther movies and PLEASE can we get a Black Widow standalone?

In the past, there were so few female-led action movies that executives tracked their box office performances as indicators of the financial viability of female-led movies.

Somehow, over the years and years of massive successes (9 to 5 and God help us...Sex and the City) anytime a female-led flick under-performed (Catwoman, Salt) those stats were used as evidence for the argument that action movies with female leads "didn't work."

Past successes were mysteriously factored out of the equation. Considered flukes. The current sum total of film history as an art form hasn't really been long enough to help us argue against that point.

Even engaging in them sometimes feels like setting off a mouse trap. A frustrating, sexist mouse trap. Until recently, when the evidence became too great to ignore. Even then, the semantic arguments continued. Even though they matter much less now. The almighty dollar tends to have the final word and I'd say it's spoken loud and clear lately.

When many of us cried our way through last year's Wonder Woman, a meme circled in response. It showed Buffy spliced next to Wonder Woman with some quote like, "We've never had such a strong woman on film before."

People would come into my facebook comments and scoff, "Said noone ever." Lots of my male friends said, "That's not an actual argument people are having." It was weird. Confusing. Let me give you an example. It was always some version of this: 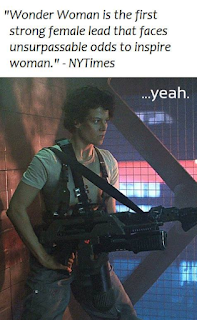 Were we being criticized for liking Wonder Woman too much or for not liking Buffy or Ripley enough? It was a no-win situation. No matter what we did, vastly different characters were being pitted against each other as evidence to neutralize...I'm not sure what exactly. Each other? The fans? Ah, the art of the false dichotomy, a much older and well-practiced technique than film.

A couple points regarding this meme:

A. The above quote seems pretty fake.

B. I don't remember anyone ever saying Wonder Woman was the first strong woman on film. I certainly didn't make that argument. So that's hyperbole in reaction to accused hyperbole, and...

C. In the wake of all the Batman movies and Superman movies, the Seagals and Van Damme's and even indie darlings like The Crow, our female action heroines were much fewer and further between. MUCH fewer and further. You can look that up. Statistically. It's just the truth. 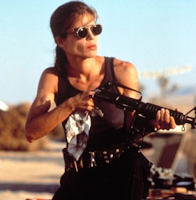 I'm not saying that not having as many action heroines as I would've liked crushed my soul or ruined my life. I grew up with She-Ra and Leia. Yes, I remember Sarah Conner. Yes, I liked Resident Evil. Sure, I thought Mad Max: Fury Road was an absolute revelation.

It's been a joy to this geek girl to have more of what I love. So friggin' sue me for being excited about Wonder Woman. About the women of Wakanda. About Lara Croft. About Ghostbusters last summer. About Harley Quinn being in a movie even if it was flawed.

Only very recently have we started to live in the era where a female-led action flick can under-perform, as Tomb Raider is doing now. As it was projected to do, and therefore moved out of summer blockbuster territory. But this time, that underperformance presents less of a risk.

Why? Because there's another female-led action flick locked and loaded right behind it. Wasp is on her way. Wonder Woman will be back in a sequel. There are more action heroines forthcoming. Action heroines have been on a slow but steady uphill climb for decades. You may think they only emerged with the comic book boom back in the thirties. They appeared much earlier. I'm talking silent film.

As just one example, Pauline from The Perils of Pauline. She had to be in danger to do stunts. But she existed and that's not nothin'. Before that?

Action heroines appeared within the confines of gothic novels. In this format, all the action took place in secret corridors and hidden passages. Because back then, a woman's place was literally in the house. It wasn't socially acceptable to buy or read a book where a woman had adventures outdoors.


After all, this was back in the hysterical era. Fainting couches and corsets. Before that? Early American Captivity Narratives. Even Shakespeare had to shipwreck a chick every now and then to let her loose in the world.

So, what's my point?

This could be the tipping point. Are we in a style cycle? Or, are we beginning to see more women in more diverse roles, for good? Whatever the intentions behind Lara's design, I believe she's a huge part of what lead us to this moment.

In summation, I'm really glad Tomb Raider's box office numbers won't be so closely watched that its performance is heretofore linked to the potential future success of any action movie with a female protagonist.

You don't have to like the new movie. You don't even have to see it. I respect your cinematic choices, whatever they may be. And remember my fellow geeks, bring to mind the wise words of our people's philosopher... 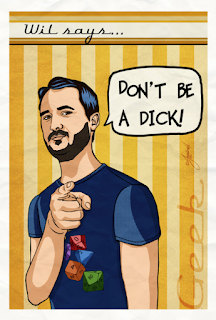