Disney's The Princess and the Frog and Rapunzel

We saw this trailer yesterday when we went to see, "UP". It looks phenomenal. I'm thrilled to see Disney stepping into 2D animation again! I remember being there as a kid and actually getting to watch them work on, "Aladdin". That was when a good deal of the animation department was still actually housed in what was then, "Disney's MGM Studios" and what is now, "Disney's Hollywood Studios". We can only hope for a return to age of hand-drawn animation.

Although, didn't it used to be called, "The Frog Princess"? What happened to that title? I like the new one better, I was just curious.

Though I don't know if it's 2D or Pixar-style. I'm crossing my fingers for 2D. There have been a lot of changes to this project so far...word on the net is that it used to be called, "Rapunzel: Unbraided" and if you google it you can find a lot of concept art. 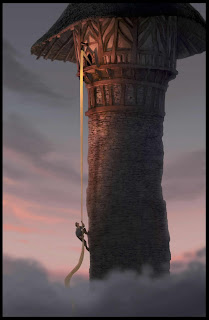 It'll be fun to have these to look forward to!
Email ThisBlogThis!Share to TwitterShare to FacebookShare to Pinterest
Labels: Disney, Movies
Newer Post Older Post Home