The Battle Cry of a Grown Up Geek 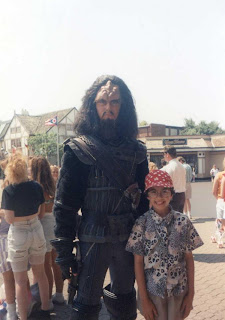 I wrote this for a now defunct Forces of Geek column in January 2009. But I took a look at it again tonight as I'm starting to consider my thesis in graduate school. I dusted it off, made some changes, and low and behold I kind of had a mission statement not only for this blog, but for my entire life.

I didn’t name my blog, “Born for Geekdom” for the way it rolls off the tongue. It’s not the most convenient turn of phrase.

But my whole philosophy on life has developed around the idea that although geeks may sometimes be socially awkward or full of useless knowledge, we have absolutely all the fun in life.

We're extremely passionate about what we like and why and we want to share that with anyone who will listen.

Years of teasing have worn down our inhibitions, which leads us to go on all kinds of madcap adventures to theme parks, conventions, movie premieres and the like without a second thought.

Sure, survival in grade school and middle school were tough. Like so many others that have come out as full-fledged geeks since, I was forged in the burning fires of a painful geekhood.

Yes, bringing, “Aliens” to a slumber party had tragic results when all the other girls showed up with romantic comedies.

Sure, bragging about all my knowledge of the Klingon home world didn’t score me bonus points in the gym class locker room.

Today, the physical signs of my geekdom are mostly gone. My giant “Scooter and Skeeter” glasses are no more. (Giant pink and purple frames with a stick-on unicorn on the lower left lens.)

My teeth may not be perfect, but thanks to braces they’re a far cry from the set of chompers I was working with as a child. (They would’ve made Gollum recoil in horror and politely suggest braces.)

I don’t know why, but I didn’t match my clothes. Ever. I had weird hair. Everything from a bowl cut to some seriously Vulcan bangs. To top it off, I was a late bloomer. So while all the other girls in my class were becoming experts with curling irons and hairspray, I still looked like a 9 year old boy with feet too big for my body.

I was loud, which sometimes saved me. Random outbursts of accidental class-clownery sometimes put me in the smart-aleck category, and the time I got sent to the office for not being willing to stop impersonating Roseanne Barr kind of lent me a brief rebel sheen. Soon after such incidents, my over-eager, what I would now call “Mary Catherine Gallagher-ness” usually put me right back at the bottom of the social food chain.

But, in my life, the end results of such early humiliations have been desirable. My penchant for all things once considered “uncool”, such as black and white movies and all things science-fiction, have found me a decent place in my modern community. (Nobody knew the INTERNET was coming and soon the geeks would close ranks. Ha!)

What I thought was a curse as a kid turned out to be an amazing gift as I grew older. It didn’t take me as long to “find myself” because I grew up learning not to apologize for what I liked. The teasing gave me a thick skin and I ended up with some seriously amazing friends, because no superficial people would come near me.

I tried new things frequently because I had nothing to lose; I was already being teased anyway. As time wore on and high school came and went, nobody cared anymore. The negative geek stigma left me, but all the benefits of my early geekhood stuck.

I’ve based the beginnings of my extremely humble career on the idea that I am a full-fledged geek. I am Trekkie, hear me roar! I am obsessed with things I am way to old to care about (cartoons) and I find myself suffering long bouts of intense inspiration with things that might seem strange to others, such as my cyclical relationship with the Haunted Mansion. I don't write for the New Yorker or Literary journals, but I do regularly appear in Geek Monthly magazine and guest in publications like Animation World, Orlando Attractions, Haunted Attraction, and so on.

I also lucked out with a fabulously geek chic husband, one who can follow me down every ridiculous rabbit hole that I end up distracted by while attempting to maintain normal adult status. For example, while talking to him on the phone today, I rambled on passionately for a good ten minutes about why Worf and Troi should've ended up together and not Troi and Riker...see? Did he tell me to get a life? No way. He joined in...and that's love.

I peddle myself as a lady geek, and usually list it in my byline. Lots of people use that shtick today, so I often wonder if identifying myself as such is all but white noise. Nowadays, “geek” is a brand that can sometimes be achieved by a pair of drugstore glasses and the espousing of some superficial pop culture knowledge. And don’t even get me started on the woes of modern lady geekhood…

So why do I do it? Because, I’m proud. Because it’s true. Because I couldn’t always be proud of it as a kid, but you better believe I can be now. And you should be too.