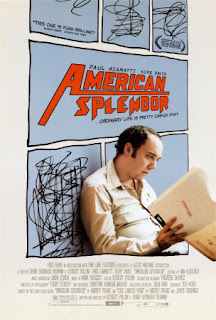 If you've never seen the highly praised HBO film, American Splendor starring Paul Giamatti, you should. It's the brilliantly told tale of a comic book writer who made a name for himself writing comics about...himself.

No superheroes, no magic powers...just his life as a file clerk at a VA hospital.  The film leans into the layers of storytelling. Not only the actor portraying him but the real-life man behind the story, Harvey Pekar.

We also meet some of his quirkier friends and family members. My absolute favorite being the "genuine nerd" Toby Radloff, who became something of a real life celebrity after his appearances in Pekar's comic, also named, American Splendor.

The film is in the same spirit of, Be Kind, Rewind, High Fidelity, and, Eternal Sunshine of the Spotless Mind. It's not here to glamourize humanity. Even with a straight-forward, non-sugar coated veneer, the film still feels populist and uplifting. Even if it wants to pretend it's not trying.

It's a really endearing flick that'll make you want to just...be yourself. I can't believe I have this whole life philosophy built around being a geek and I didn't know Toby Radloff existed before last week.

Harvey Pekar visited Ball State last week and I was lucky enough to hear him speak and be in the same room with him three times. He was just your average Joe, maybe a touch more neurotic, but dang if he wasn't just as lovable and quirky as you think he's going to be when you watch the movie.

I wrote a little motivational piece on what I learned just by being around him for Five Sprockets. Here's the LINK.

I like Pekar's take on everything. From writing to life, he's just so no-nonsense. It's so new to hear someone admit what they want out of life, but also not be completely self-obsessed about it. Anyway, it was a really amazing week that left me with a lot to digest.

If you've ever felt like a loser, wanted to be a writer, loved comics, or thought you were a nerd, you need to see this movie.