Starbase Indy 2010 - The Con in Pictures 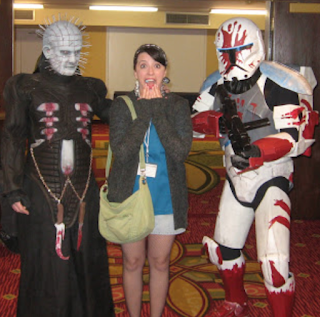 Jake and I just returned from Starbase Indy, the best sci-fi convention you'll find in the entire Mid-West.

This year was even better than the last. We've barely had time to process the weekend. We'll be unpacking Christmas gifts from the Dealer's Room, autographs, cards, and flyers for days. My favorite being the advertisement for A Klingon Christmas Carol, happening now in Chicago.

What we can share right now are pictures and a promise that the best coverage of the event is yet to come.

There's a video on the way with interviews from con guests, Klingons, the president of Indy Knights, and the Trek-based band Five Year Mission as well as an inside look at plenty of costumes, panels, and events that took place and some onscreen shenanigans by Ethan Phillips.

We're capturing footage right now, but it'll take a couple of weeks to edit, render and upload, after which I'll post the video here at Born For Geekdom and send out email and facebook messages to all those involved in the filming. Until then, here's a sneak peek at Starbase Indy 2010 in photos. I'll also post a list of businesses we bought merchandise from and some we plan to buy from in the future. Support small business! Especially those run by your fellow geeks.


Email ThisBlogThis!Share to TwitterShare to FacebookShare to Pinterest
Labels: Conventions, NASA, Star Trek, Starbase Indy, you ought to be in pictures
Newer Post Older Post Home