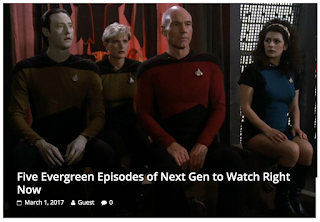 Read it here or check out the excerpt below:

"As my rewatch began to unfold, I noticed an unexpected side effect, a healing, calming feeling.

For every lighthearted episode – “Data’s Day”, anything with Q – I’m finding even more that don’t shy away from serious cultural commentaries.

Star Trek has always imagined a better future, but it’s never asked us to buy into one where problems don’t exist. Instead, it shows the problems and how diplomacy, compassion and intelligence can solve them."

P.S. Here's some super nerdy Next Gen fanfiction I wrote. I always wanted a follow-up to the Moriarty episodes where a Holodeck Sherlock showed up instead of Data fulfilling the role.