I've got a theory. I think most people have a secret wish when it comes to meeting their favorite celebrity. Whether it's at a convention, or by happenstance on the street, many people run that scenario in their minds.

In fact, in our entertainment-obsessed culture, I think a lot of hopes and emotions are tangled up in our fandoms in really complex psychological ways.

FYI, I'm not judging you for that. That would be a pretty serious pot/kettle situation.

In fact, as a former spaz in recovery, I think I can help you learn how to translate those feelings. By answering four simple questions, you can learn how to judo-throw your fangirl prowess into a career doing what you love.

Did you know that if you have passion for a fandom, you can channel some of that energy into a related career? How do I know? I've done it.


I started working as a journalist in 2007. I experienced giddy, nervous feelings a lot in the beginning. On more than one occasion, I found myself overwhelmed by them in ways that embarrassed me.

Once when I was working as a tv reporter, I literally yelled, "I love you!" to Patrick Stewart in an empty con-hall before it was open to the public. I then hid behind the camera guy. Camera Guy was not thrilled when Stewart turned around to search for the source of the voice and thought it was him.

There's also this essay about meeting Doug Jones. In fact, I have a lot of embarrassing stories. Brent Spiner. Armin Shimerman. James Marsters. I could go on. But I won't.

The point is, I totally and completely understand how it feels to fangirl out in a negative way.

As the years went by, I noticed a pattern in my emotions and behaviors. It wasn't the celebrities that got me so hyped. It was my own desire to work as a writer and creator that filled me with such weirdo energy. Being around people who were working in the industry felt like being close to what I actually wanted to do with my life.

And now? I'm doing it. I've sold two screenplays. I recently wrote four more. I got to work as a professional puppeteer for three years. All kinds of weird and wonderful things.


Oof...I still can't even get through that thirty-second scene without crying. For so many reasons. Sometimes I get sad when I think about how long it took me to do the detective work on this fandom phenomenon.

But, you know what makes me feel better? Two things:

1. Occasionally returning to journalism to spread the word about this via interviews with really cool people.

2. Directly talking with my fellow fangirls and fanboys, asking them a series of questions that ultimately leads to some breakthroughs. 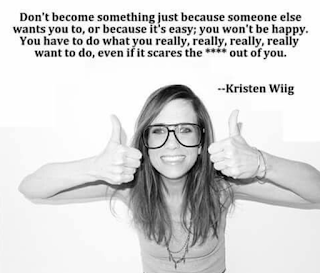 a. What's your biggest fandom and why?

b. Who do you most want to meet in person and why?

c. What do you really really want to do with your life and what's stopping you from getting started?

d. What's your secret wish when it comes to meeting a celebrity? You don't even have to say it out loud to anyone. Just tell yourself the truth.

What do you hope happens and how can you take that secret wish and start making it come true for yourself without the help of a celebrity?

After all, they're just people. Not genies. I like to stick to the policy of admiration vs. idolizing. Again, for more reasons that a single blog entry can hold. But I promised you some Ashley Eckstein interview goodness, then tricked you into reading about career help.

I was lucky enough to chat with Ashley Eckstein in January. That interview was recently published on Hello Giggles. (And featured on the home page, no less. Which made me feel super cool.)

If you don't already know Eckstein, she founded Her Universe, has a prolific acting career, and is well known for her work as the voice of Ahsoka Tano from Star Wars: The Clone Wars.

My secret mission with this interview was to give the younger readers of Hello Giggles an example of what two women talking about business looks like. Why? Because I think there are a lot of young entrepreneurs out there who hold themselves back because they don't feel like they have the vocabulary to say what they really want to say. They think they aren't ready or legitimate.