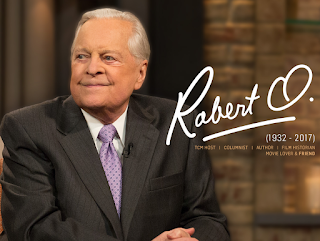 I'm very sad to hear of the passing of Robert Osborne. Like so many others, I grew up watching him on TCM.

We couldn't get cable in rural Indiana in the late eighties and early nineties, so my aunt from Louisiana sent us VHS after VHS of Osborne's movie marathons. Using his signature voice and his extensive knowledge, he taught me all about Danny Kaye, Fred Astaire, Rita Hayworth and so many others.

I have a special affinity for anyone who takes the time to teach, curate or entertain. Osborne did all three simultaneously for years and years. He's one of the biggest reasons why classic film has become such a significant part of my life. I even minored in film studies in college. Those courses felt like an extension of my childhood. There wasn't a single classmate of mine who didn't know and love Osborne too.

All those years spent studying with Osborne, then later in college, eventually turned me from a fan to a writer. I spent years as a professional film critic. I've sold two screenplays, made a few short films. So much of that is because of what he, and my professors, taught me. Not just facts, but how to analyze film. How film can impact the world. What film teaches us about time, place and culture.

Thank you for everything, sir. Godspeed.