I was recently contacted by BHI and asked if I wanted to interview Director Stuart Gillard about his recent SyFy channel movie, "Riverworld", which just came out on DVD. I of course, said yes, because I'll never pass up a chance to interview a working creative, especially in this case someone who has been working for so long in a very tumultuous business. Below is the interview. Gillard's answers are in bold. For the record, I actually think that, "Riverworld" would make an amazing series, something in the vein of, "Firefly" that could sustain itself as a week-to-week show that essentially has endless science fiction possibilities. In all fairness, I have never read the source material, so I'm sure that serializing and creating a new show from beloved novels might be controversial.
How much of the appeal in directing, “Riverworld” was the “what if” factor? For example, what if Pizarro had to cross swords with a Samurai? What if Mark Twain ended up stuck in a strange purgatory with an endless river? (Especially given how much of Twain’s writing had to do with rivers.) The questions that the source material presents (from the books) must’ve been both daunting and exciting in terms of responsibility to communicate them to an audience. As a director, were you more excited or more nervous to portray these wild hypothetical situations? 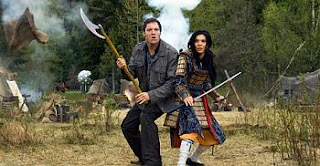 I was very interested in this project because of all the endless possibilities for people from all ages to interact. Where else could I as a director spend a day directing Mark Twain, a modern American journalist, Pizarro, Sir Richard Burton and a 13 c. Samurai woman warrior?


Were you concerned about having to portray such a large and complex storyline over such a short amount of time? Most adaptations from books have to wrestle with the question of time and what to cut out and leave in, can you talk about that process with, “Riverworld” and how much you were able to contribute to (or remove from) the script?

Yes, this was very daunting, especially given the fact you were dealing with so much material, so many books and a legion of fans. In the end it was determined that it was better to keep the underpinning philosophical question: what are we all doing here? And what would we do if we all had a “do over”/ would we fall back into old patterns and behavior or would we evolve and strive for a higher goal? For me what was important was to put our characters into a pressure cooker and see how they each react to the choices.

As a director and as someone with such extensive writing experience, can you talk about how your past experiences with sci-fi and fantasy (The Outer Limits) and magical plotlines (Charmed) influenced your work on, “Riverworld”? 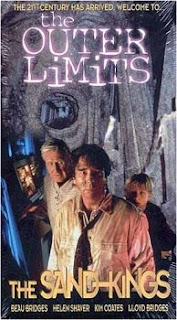 “Outer Limits” was again interesting because the two hour movie I directed which was in fact a Pilot for the series was once again based on a very well known short story, “SandKings”. And again one had to take a fresh approach to the material in order to make it work. Manny Coto wrote a great script and I was then able to bring it to life with very few changes. Beau Bridges and I got along very well and I was able to improvise and invent some key sequences on set because he trusted me completely. He is a wonderful actor. “Charmed” was different—it was basically a series about three sisters who just happen to be witches, so it was always grounded in the characters with the magic thrown in. That is what works in all of these cases, and something I wanted in “RiverWorld”—you have to care deeply about your characters and want to go on the journey with them. The “sci’fi” elements can only be a part of that ; they can’t be everything.


Were you involved in location scouting, and if so, what was the search like looking for places to film that seemed entirely natural and untouched? So many of the locations were extremely beautiful, the types of backdrops that are normally created with CGI or matte paintings.

Thank you. Yes, I flew up to Vancouver and scouted all the locations personally. I worked with my Production Designer, Michael Joy, and also involved my long time DOP, Tom Burstyn. It was extremely important to give a sense of scale and scope and grandeur to the piece; to keep it cinematic and not small screen. I also wanted to keep everyone unsettled. 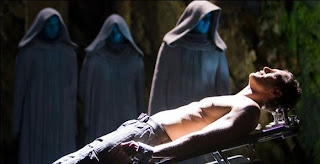 No, I designed the scene that way on purpose. It was a deliberate reference to water boarding—which I personally find abhorrent. That’s why I wanted my character strapped down and inverted and powerless; completely at the whim of the Alan Cummings Caretaker.

Have you been a fan of science-fiction and fantasy as a viewer in the past and if so, can you talk about some of your influences in those genres and how they affected you during your time filming, “Riverworld”?

I like to work in all genres but to me science fiction is not really fiction at all but rather a way to ask interesting questions about life. And have an excuse to answer them in very different ways as well. And of course it also gives me as a director a wonderful excuse to shoot something wild.

Alan is great great fun to direct. He is so good and so prepared. We had the best time. I would look over at him in the middle of the torture scenes and he would have this impish grin in between takes. A real joy—I’d work with him again anytime. 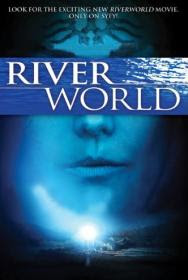 On the blue note, can you talk about any comparisons that have been made between “Avatar” and “Riverworld” simply because of the marketing emphasis with blue characters and the overall blue color scheme? Sometimes films are lumped together, unfairly, because of aesthetic similarities, have you experienced any of that?

It was a complete coincidence. We had tried different tones to see what would be interesting on camera to distinguish our Caretakers because I felt they needed to look different or it would all be very confusing. This again is where we differed from the books. We shot this last year, well before “Avatar” came out—so it was too late to change. I like to think Cameron copied US. (Gillard Laughs.)

Last but not least, is there anything that you wish people knew about you, your career, or “Riverworld” that you feel like they don’t know?

You were very comprehensive. I would like to add that I had an extraordinary cast on this show, starting with my three leading men. All brilliant, all able to do the physicality of the parts. Tahmoh Penikott, a wonderful actor, a MMA himself and able to do all the action and fighting. Mark Deklin, he had always wanted to play Mark Twain and was also always prepared; a stage actor with enormous presence. And Peter Wingfield was my one and only choice for Sir Richard Burton.

Peter absolutely inhabited that character; it was critical to have an antagonist who was smart and in many ways who was right about what he was doing. Also I have to mention Jeananne Goosen who was incredible as Tome Goze—Jeananne was the most natural fighter my stunt coordinator had ever seen.

And lastly, please get all the fans to write in to Sy Fy and tell them to make “RiverWorld” as a series. It would be killer.

So there you have it, if you're a science fiction fan, watch a lot of SyFy and are really wanting a new series, take the time to email the good people over at the network. I've done some research on audience reaction to the, "Riverworld" movie and it seems like a lot of people felt that the film ended exactly where a series could easily pick up. I like the idea of an adventure/sci-fi show that includes Mark Twain. After all, even Star Trek: The Next Generation included Mark Twain not once, but twice!

My thanks to the good folks at BHI for always sending me great opportunities and for a great exchange with Gillard, who was super forthcoming and so kind. More often than not, when I'm handed an interview with an actor, director, or producer, these people are really kind and eager to communicate with fans. It's made me less cynical about working in the entertainment business actually, so there you go. A reason to be positive.

Write to SyFy if you want a Riverworld series! (That's you Battlestar Gallactica and Stargate fans, you'd enjoy this as a series...)