Poirot: Murder on the Orient Express - The Latest PBS Interpretation is Like a Fine Art Painting 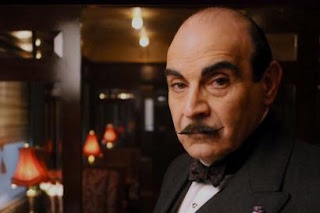 The newest filmed “Poirot” mystery aired July 11th on PBS. If you’re unfamiliar with Poirot, you’re not alone. I've heard of Poirot peripherally my entire life, catching glimpses of box sets with his name on them at book stores and seeing the occasional promo over the years on PBS. But you see, I am a Sherlock Holmes addict. I mean, a serious addict. I started reading the famous Sir Arthur Conan Doyle mysteries during a trip to Eastern Europe in 2005 and I haven't put them down since. I’ve read every story multiple times now, listened to the old Basil Rathbone audio plays seen every Holmes movie I could get my hands on. (Including, "The Great Mouse Detective", it counts!) My earliest experiences with Holmes were, believe it or not, via “Star Trek: The Next Generation”, which featured occasional episodes revolving around Holmes’ fictional universe in the holodeck.


I tend to get a bit, how shall I say this, obsessive about my entertainment choices. If I love something, I commit to it all the way. Star Trek, Star Wars, Futurama, and many other film and television properties have all been properties that I’ve obsessed over in the past. My “relationship” with Holmes has been no different. So when people have suggested different classic murder mysteries to me, I’ve turned my nose up at them, thinking, “What could possibly be better than Sherlock Holmes?”

Well, this week, I found out. Not that it's better, but it's at the very least an equal series. I couldn’t sleep Monday night and was flipping channels when I accidentally ran into the brand new Poirot movie at one in the morning. (Episode, movie? I’m not sure what the correct terminology is here since I’m new to Poirot on PBS.) Alan Cumming introduced the film and from the opening shot to the ending, I didn’t look away. No trips to the bathroom, no breaks for a glass of water. I was glued to the television, captivated for the first time in a good long while by TV. Ah, the power of public television.

I would recommend, “Murder on the Orient Express”, this new 2010 version to absolutely anyone. But if you love murder mysteries, Sherlock Holmes, or Poirot, then that’s just a happy bonus. But any film lover will be taken in by this thickly layered storyline that puts a focus on Poirot's personal beliefs in the wake of a challenging recently solved case and already on his way to another. The quality of the film alone is enough to entranse anyone, with each shot carrying subliminal layers of meaning through composition. The subtetly of this work was one of the best parts with the actors saying so much through expressions and nuances of performance, many times without even needing dialogue. There was an independent feel to it as well. Even though it is expensive in appearance, the indie feel comes through via the intimacy brought by BAFTA winning director Philip Martin and the dramatic and claustrophobic setting of a train.

Honestly, I would’ve paid to see a film of this caliber at the box office. The film is shot in rich color with a historical accuracy in the recreation of the train, props, and costumes that I can personally vouch for. You see, I traveled via old timey train from Romania to Bulgaria and I can tell you that the train set featured in, “Murder on the Orient Express” looked almost identical to the antique train that I rode, consequently also in the year 2005. (Apparently, that was the year I was meant to fall in love with literary murder mysteries.)

Aside from the beautiful visuals, the film has a quick pacing and paints a complicated portrait of Poirot, a unique character in the throes of a quiet personal crisis. Pair that with an open-ended final shot that lets viewers draw their own conclusions, and you’ve got a truly fascinating work of television entertainment unlike anything you would normally see. One that requires a viewer to participate instead of handing them all the answers on a silver platter. Again, much the way that a work of art, once finished, is open to interpretation.

The day after watching it, I called my father to discuss it, knowing he would have watched it since we’re both PBS geeks. When we got to talking about the ending, we had completely different interpretations of what it meant, which added a fun little bonus to the discussion of the film for us, each arguing our own perspectives.

David Suchet once again plays, “Poirot”, the justice-minded French detective, in what has become a long-running tradition for the actor. The other roles are expertly cast, including a fun appearance by the seldom seen Barbara Hershey and several noteworthy British actors.

Half the fun of a murder mystery is trying to stay ahead of the detective to see if you can solve the case first. I had never read, “Murder on the Orient Express”, thought I had a pretty good handle on the culprit, but was completely surprised by the ending. I’m sure it’s legendary to those who know and love Agatha Christie, and it must be one of the greatest answers ever written to that famous murder mystery question, “Who done it?”

Check regularly to see if you can watch it for free on PBS.com. It was available a few days ago, but has since vanished. I'll cross my fingers that it goes back up, but also check your local listings to see if it's playing on  your local PBS affiliate. I hope you enjoy it as much as I did. I can say that though I’m forever loyal to my dear Holmes, I am now officially a fan of Poirot and look forward to checking out some Agatha Christie! In the meantime, watch the latest version of her famous story for the artful direction, the glorious cinematography, the classic mystery, and you may find yourself completely obsessed with a new fella.

P.S. For a funny little bonus tidbit, notice that in the preview below, there are a few seconds worth of footage at a train station in which the green screen background has not been keyed out. Don't you just love catching those little details?