Requiem for a Movie Theater - The Village Theater Is Officially Gone

I originally wrote this precisely a calender year ago as a column for a website I used to work for. Yesterday, when in my home town to visit friends and family, I saw that the marquis for the Village Theater had finally come down. She's off life support now, the old girl, and who knows what she'll become. I'm sad to say that it looks like the bargaining phase of grief that I was going through a year ago makes this writing more in the acceptance stage. A "eulogy".

Individual movie theaters are almost completely a thing of the past. Some cities are well known for their unique movie theaters, there’s Austin of course. (Regretfully, I did not get to go to the Alamo Drafthouse when I was in town last April.) Atlanta seems to have its fair share, of course New York City has more than a few unique places still standing. Most major cities are lucky that way, there’s enough population for small movie theaters to generate income and keep their doors open. But this is mostly not true anymore in small town America anymore. At least, not for me in Indiana.
I love my state, so don’t expect me to start state-bashing. Indiana has everything in very close proximity, including a killer film festival (Heartland), plenty of freelance work, beautiful locations and a burgeoning film scene thanks to recent tax breaks for filmmakers. It’s a great place to be if you’re into film. So that’s not my problem... 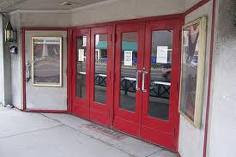 P.S. (July 2010) Of course, I didn't buy the theater. I don't think anyone did. Now the sign is down and that artifact is gone forever. A moment of silence for The Village theater...
Email ThisBlogThis!Share to TwitterShare to FacebookShare to Pinterest
Labels: Eulogies, memoir
Newer Post Older Post Home