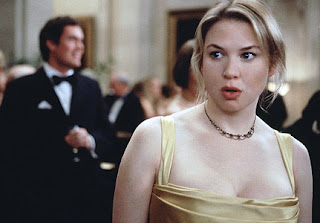 Hooray! Bridget Jones rides again in a third installment set to begin filming at the end of this year, according to People.com today. This is not only fabulous news, but funny timing, as I was just saying to Jake that Jones was Zelwegger's best role ever yesterday.

I love the first film with all my heart, I like the second one an awful lot too, even if the plot was a teensy contrived. Both have a tremendous amount of re-viewing value and Zelwegger brings back a style of distinctly non-self-conscious comedy that not many actresses today can achieve. Nor do many of them try, for that matter. (I'm talking with or without the extra pounds. It's not the weight, it's the performance. It's brave and vulnerable.)

Aside from being truly funny as a character, she is a bit of a mascot isn't she? What with her normal proportions and her constant mistake-making. Throw in all the British culture, and I'm there...with bells on. It hearkens back to the personality comedians of days gone by, stick Bridget Jones in any situation and I'll watch. Can't you just see her in black and white trying to move a piano or something? She's classic like that. (When's the last time you saw something "hearken", eh?)

You see, I have a bit of a British obsession, and it was all kicked off by the first Bridget Jones movie which my best friend Lindsay insisted that I watch. Thank goodness she did, it started me down a wonderful road.

Yes, now I am a regular watcher of BBC shows, especially the mysteries that show on PBS like, "Poirot". I started watching Richard Curtis movies. I think I once read a Jane Austen book....okay, so I'm no expert. But I just love the culture. I am thoroughly enamored of all the Sherlock Holmes stories, have read them all and have become a bit of an expert. That's got to count for something, when do I get my badge?

I also seem to favor English actors by accident, Michael Caine, Patrick Stewart, Bob Hoskins, Jim Broadbent, and on and on.

There's a classiness to British culture that I long for here in America, a rich cultural history.

I don't mean the kind that they only show in movies, all the Arthurian legend and what-not. Though I do love that too. I just mean the subtle differences here and there. Tea times and accents and scenery. I'm a little embarrassed to admit it because I'm sure that makes me sound like a dumb American who has no real idea what British culture is like. Because that's true. But I love it all the same. My fish and chips, my Earl Grey, my British slang ("sod off" and "round the twist" and "steady on" and all that)....my beloved Bridget Jones and the cinematic London that she occupies.

So here's to another Bridget movie and my shamelessly incomplete knowledge, but very real love, of British culture. I'll have a pint on that.
Email ThisBlogThis!Share to TwitterShare to FacebookShare to Pinterest
Labels: Movies
Newer Post Older Post Home