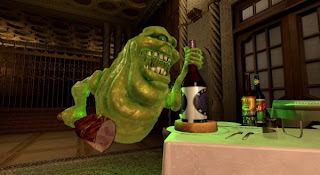 The Ghostbusters game is everything you ever hoped it would be. It's an absolute blast, it's actually really difficult, it looks amazing, it's funny, and it's essentially the perfect film to game adaptation.

Our friend Josh, who is officially a member of the geek consortium, allowed us to come over and play the game before he himself had defeated it...


I don't know if you're familiar with video game etiquette or not, but him letting us do this is something akin to opening a fine bottle of wine, having a sip and then offering your friends the first two glasses, sitting back while they enjoy it and then having some yourself. So that was very cool.

The game is tops in the atmosphere department. Just like the movie, the game actually creeped me out a little bit. Okay, a lot. It's more fun for me to play than Resident Evil though, because most Resident Evil games actually scare the living daylights out of me enough that I don't want to play them all the way through. I may or may not have minor heart problems thanks to those games. (I kid, I kid.)

But the Ghostbusters game basically gives you the power to climb inside the movie and walk around, which is really what I want over and above great game play in this case. You actually get to visit many of the film's key locations, including the firehouse, the hotel, the museum, and more as well as battling famous foes such as the Staypuff Marshmallow Man.
And because Harold Ramis and Dan Aykroyd actually wrote the game, it's filled with hysterical extras.

For example, at one point you encounter the ghost of a sea captain, Pappy Sargassi. As if the name weren't giggle-worthy enough, the backstory on this guy is that he is either cursed or, "the unluckiest fisherman who ever lived" because he died while choking on a fishstick and being eaten by a Great White Shark. That's pure Ramis right there.

Of course, having all of the original Ghostbusters back for the voice-work makes it even more fun. You get to play as a Rookie in training, which initially I thought would be lame. But again, it puts you in an immersive experience allowing you to feel like you jumped into the movie instead of playing pretend by picking which Ghostbuster you want to be, a la the way we all did when we were kids. (I liked Peter and Egon the best...in fact, Egon was one of my earliest movie crushes.)

The game is also very interactive. You know how in some games, there are only a handful of interactive voice cues and they just use them over and over again? This is not the case here. Whichever Ghostbuster is with you, they say things to you based on what is happening, where you are, and what the characters would actually say. For example, Venkmen is always sarcastic and doesn't hold back with the sass, especially when you do something stupid. Who doesn't want to be mocked by Bill Murray?
The game is amazing, fun to play, and even more fun to watch someone else play. It takes a while to catch on when it comes to using the PKE Meter, but it takes a while to get acclamated to any new game controls really.
One of my favorite things about video games is the fact that they're really great for getting a roomful of people together. Block out a weekend, get a couple of friends, watch the first movie, then just play all weekend. Because once you get started playing, you won't want to stop.
I highly recommend that you visit the game website for more information. It's pretty expensive as well, so if you're an adult, consider splitting the cost with a friend and sharing custody.