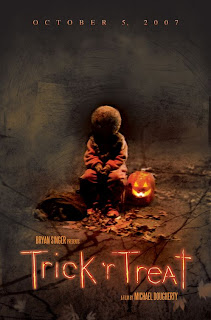 Many moons ago, a movie was made. Word on the street was that it was really really really good. A near perfect Halloween movie, or so the legend went. But the years started to go by...and the movie never debuted. Nobody really knew why, fans who saw advanced screenings raved about it. The buzz was HUGE. But the studio, Warner Bros. simply never released it. The first release date was October 2007. Then there was a rumor that Halloween 2008 was the final release date, but it came and went and NOBODY heard of it again. Just as the film started to fall into shadow, as we Lord of the Rings geeks like to say, THIS HAPPENED. I saw this thanks to Todd Sokolove on Facebook.

http://trickrtreat-movie.warnerbros.com/
I haven't been this excited for Halloween-themed material since ye olde Halloween Buffy episodes!